By decoding honeybees’ waggle dances, which tell other bees where to find food, researchers have found that bees in agricultural areas travel further for food than those in urban areas. The findings are published in the British Ecological Society’s Journal of Applied Ecology.

In the study, researchers at Royal Holloway University and Virginia Tech decoded 2827 waggle dances across 20 western honeybee colonies in London and surrounding agricultural areas. The information conveyed in the dances told the researchers that foraging trip distances were consistently shorter in urban areas compared to agricultural areas.

They also found no significant difference in the amount of sugar collected by the urban and rural bees, indicating that the longer foraging distances in rural areas were not driven by far away, nectar rich resources and that urban areas provided honeybees with consistently more available food.

Professor Elli Leadbeater of Royal Holloway University and author of the study said: “Our findings support the idea that cities are hotspots for social bees, with gardens providing diverse, plentiful and reliable forage resources. In agricultural areas, it is likely harder for honeybees to find food, so they have to go further before they find enough to bring back to the hive.”

The researchers warn that because urban areas constitute a small percentage of total land cover, they are unlikely to be sufficient to support bee populations across a landscape dominated by intensive agriculture.

Professor Leadbeater said: “Conservation efforts should be directed towards increasing the amount of non-crop flowers in agricultural areas, such as wildflower strips. This would increase the consistency of forage available across the season and landscape as well as minimize bees’ reliance on small numbers of seasonal flowering crops.”

There are several challenges in assessing and comparing floral resources in different habitat types. For instance, large areas need to be surveyed to get a good picture of flower species richness and in cities it is almost impossible to access land in private gardens.

“In this study, we overcame the hurdles of assessing floral resources by getting the bees themselves to tell us where to find food.” Said Professor Leadbeater. “Calculating the distance to forage indicated by the waggle dances provides a real-time picture of current forage availability, from the bees’ own perspective.”

The waggle dance is unique to honeybees and is used to communicate the location of floral resources to the hive. When a honeybee returns to the hive with food, instead of immediately leaving to forage again, they will repeat a figure of eight movement on the honeycomb. The duration of the central run of this dance tells other bees how far to fly, and the angle tells them which direction to take.

In the study the researchers recorded a total of 2827 waggle dances between April and September 2017, across 20 sites: 10 in central London to represent urban land and 10 in agricultural land in Kent, Surrey and the other home counties. They then decoded these dances and mapped out where the bees had been.

They also collected data on the sugar concentration from forages by collecting 10 returning bees on each hive visit and inducing regurgitation of collected nectar. This allowed the researchers to test their assumption that longer foraging trips reflected a dearth of available forage rather than the existence of distant but high-quality resources.

Because the study focussed on honeybees, which are domesticated and are not threatened, the researchers warn that the findings will not apply to all bee species. Professor Leadbeater said: “While we can potentially extrapolate our results to some wild bees, such as generalist bumblebee species, our results should not be used to imply that this pattern will hold for all bee species. For many solitary bees, the existence of specialist host plant species or nesting sites will be important in determining whether cities are valuable habitats.” 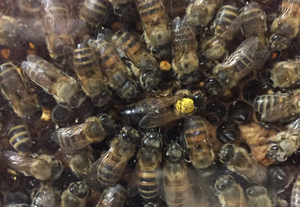 A queen bee surrounded by workers inside an observation hive