Researchers at the KU Leuven Rega Institute and CD3 have developed an ultrapotent inhibitor of the dengue virus, which causes the tropical disease known as dengue. The teams collaborated closely with Janssen Pharmaceutica, N.V. The antiviral molecule is exceptionally effective against all known dengue variants and could be used for therapeutic and prevention purposes. The teams have published their findings in Nature.

Each year, dengue infects up to 400 million people, sickens up to 100 million, and kills thousands. Symptoms of the disease include a high fever and severe muscle and joint pain. Some patients also suffer from subcutaneous bleeding or capillary leakage.

The disease is caused by the mosquito-borne dengue virus, which is found in nearly all (sub)tropical regions, but especially in Latin America and Asia. The frequency of outbreaks continues to grow, and the virus is expected to impact billions more in the coming decades as the virus spreads to other regions due to climate change and other global trends. In 2019, the World Health Organization already included dengue in its list of ten threats to global health.

No antiviral drugs are currently available to prevent or treat dengue. This may change thanks to the breakthrough discovery of teams led by Johan Neyts (Rega Institute at KU Leuven) and Patrick Chaltin (CD3/CISTIM Leuven vzw), which was carried forward in partnership with a team led by Marnix van Loock (Janssen Pharmaceutica, N.V.).

Blocking the 'copier' of the virus

The antiviral has a unique mechanism, explains Professor Johan Neyts of the Rega Institute at KU Leuven. "Together with the research group of Professor Ralf Bartenschlager from Heidelberg University, we demonstrated that our inhibitor prevents the interaction between two viral proteins that are part of a kind of copier for the genetic material of the virus. If this interaction is blocked, the virus can no longer copy its genetic material. As a result, no new virus particles are produced."

Together with Professor Xavier de Lamballerie (Aix-Marseille University), the team proved that the antiviral is very effective against all known variants of the dengue virus.

The researchers tested the inhibitor in mice as well. Suzanne Kaptein (Rega Institute at KU Leuven): "Even a low dose of the drug administered via the oral route proved to be very effective. What is more, the treatment is still effective when the infection is already at its peak. In these cases, the number of virus particles in the blood dropped drastically within 24 hours after the start of the treatment. This goes to show how extremely potent the antiviral drug is."

Research in mice suggests that the inhibitor could also be used for prevention purposes. These findings are cause for optimism, as the existing dengue vaccine only offers partial protection.

Professor Johan Neyts (KU Leuven): "Potent and safe dengue drugs that can be easily taken as tablets could offer anyone effective protection for a certain period of time. Think of people living in areas with an ongoing dengue outbreak, for instance: they could take a dengue drug for a couple of days or weeks. The tablets could also protect travellers or NGO workers during their stay in high-risk regions."

The antiviral drug will be developed in an easy-to-administer formulation that can be optimised for the treatment and prevention of the disease in dengue-endemic tropical and subtropical regions.

The development of the antiviral was a long haul, says Professor Johan Neyts (KU Leuven). "We started this project in 2009. First, we examined many thousands of molecules in a compound library of the Centre for Drug Design and Discovery (CD3) to find one or more molecules that inhibit the virus in lab-grown cells. In other words: we started looking for a needle in a haystack. As soon as we were able to identify such molecules, the medicinal chemists at CD3 could start to work with them. They created many versions of the molecules to boost their efficacy against the virus."

There are four types of dengue viruses, and the molecule needed to be equally effective against all four of them, adds Patrick Chaltin from the Centre for Drug Design and Discovery. "It was no easy feat to reach that goal: the optimisation process involved about 2000 steps. Years of intensive collaboration have now resulted in an ultra-potent dengue inhibitor that we are proud to present."

Since 2013, scientists from Janssen Pharmaceutica – including Marnix Van Loock, Olivia Goethals, and Tim Jonckers – have collaborated closely with the KU Leuven teams, accelerating the chemical series into further development.

KU Leuven and CD3 have ambitious plans for the fight against other viruses as well. For one thing, they are searching for broad-spectrum antiviral drugs against coronaviruses. Patrick Chaltin: "In the future, we want to develop a range of antiviral molecules against the different virus families with pandemic potential, so not just coronaviruses. This will require considerable financial resources, which we are now trying to acquire." 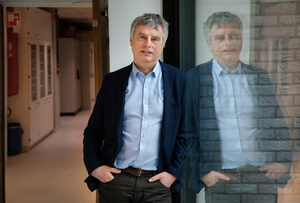