Researchers at Ural Federal University have created a unique tube finning technology. It allows increasing the heat exchange, decreasing the metal intensity, and thus reducing the cost of the finished product. Employees of the Experimental Production Complex (EPC) and the RIC Innovation and Implementation Center have been working on the technology. They have already applied for a patent and made their first commercial order.

“There are many manufacturers of finned tubes in Russia, but the main difference of our technology is that analogs have spiral finning, and we have invented how to install the fins along the tube,” says project manager Alexander Volkov. “It would seem that there is nothing wrong with welding the fins lengthwise instead of crosswise. But technologically it is extremely difficult, time-consuming, and expensive. Similar technology is used in Italy and China. But there the manufacturers use spot condenser welding: a roller is rolled and the rib is tacked with points.”

Ural Federal University engineers used laser welding: they weld the ribs with a continuous seam so that the metal of the pipe and the rib becomes homogeneous, inseparable. According to the creators of the technology, any metal can be welded to a pipe of any diameter.

“The speed of laser welding is very high - up to 9 meters per minute, so the heat input into the metal is small,” says the chief designer of the project Vladimir Podgorbunskikh. “This means that metal is heated with high power, but at a very high speed, and during the passage of the beam it has time to melt, flow to the pipe and tack, while the pipe has no time to heat up and deform, which cannot be achieved by condenser welding. We are the first in Russia, who took up this work and performed it. At the same time our products are 1,5 times cheaper than their foreign analogs but with better welding quality and 15% higher heat emission efficiency.”

Now the first batch of pipes is being tested in production, and the EPC of UrFU received the second order for the finned tubes with a smaller diameter. The first order was fulfilled in three months: 9.2 thousand fins were welded on 20 pipes (460 for each pipe).

“We worked off this order in “manual mode”. Now we have signed a contract for an automated laser welding system. In December we will get the equipment, adjust it, work out the technology - and in spring 2022 we will be able to launch serial production. This will increase the speed of work up to three to five times. And, if there are large orders, the robot could potentially work around the clock, which also increases productivity,” says Vladimir Podgorbunskikh.

Ribbed tubes are used in the chemical, petrochemical, and refining industry (condensers, gas heaters, gas coolers), in machine-building (compressor and refrigerating units, oil coolers), in the nuclear industry (for the production of coolers, dryers, and steam heaters), in air conditioning and heating systems.

The essence of the laser welding process is reduced to the formation of a homogeneous crystal lattice in the welding area of the tube and fin, obtained as a result of metal melting by a robotic laser unit. This makes it possible to obtain more efficient heat-exchange characteristics with less metal consumption, as well as increased strength characteristics compared to world analogs.

The UrFU Experimental-Production Combine was established in 1956. Today the Experimental Production Complex is a structural subdivision of the university. The plant provides more than 30 thousand residents of Ekaterinburg city with electricity and heat and fulfills the orders of industrial enterprises. The plant includes a boiler and turbine shop, electrical shop, experimental production (one of the most equipped manufacturing facilities in the region, has a full cycle of metalworking). The number of employees of the Ural Federal University EPC is more than 200 people. 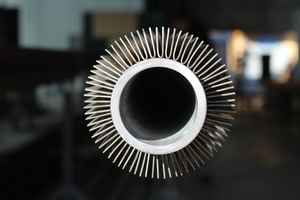 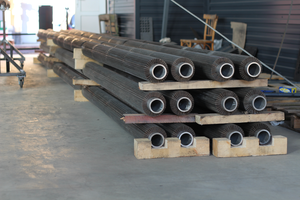