Trained dogs are well known to use their acute sense of smell to identify explosives, contraband and even certain types of disease. Being able to automate such detection skills could be useful in a range of settings, from airports to public buildings.

Now, University of California San Diego chemists have developed a technology for monitoring the health of algae crops, one of world’s most promising sources for sustainable products being developed to counter global issues stemming from fossil fuel pollutants and product waste.

As described October 1 in the Proceedings of the National Academy of Sciences, a diverse group of researchers—from undergraduates to senior faculty—has collaborated in a Departmnt of Energy project to develop a real-time measurement technique that could save hundreds of millions of dollars in algae biomass losses. From new biologically based fuels that power vehicles to renewable plastics based on biodegradable polymers that eliminate waste in the oceans and overloaded landfills, algae are considered a key to a future of sustainable products.

“In order to have enough algae to supply all of these renewable materials—biofuels, bioplastics and nutraceuticals—we need to find ways to increase algae production and yield,” said Robert Pomeroy, the PNAS paper’s senior author, of UC San Diego’s Department of Chemistry and Biochemistry. Pomeroy led the development of the technology with paper coauthor Ryan Simkovsky. “Keeping algae healthy is one way to do this. We can’t afford to lose acres of these crops.”

The most economically competitive method of cultivating algae is to grow the tiny aquatic organisms in large-scale “raceway” ponds. Such open biomass production, however, leaves their growth vulnerable to contamination by a range of microscopic pond invaders. Infectious organisms that graze on algae include viruses, bacteria and fungi that can decimate algae crops in a matter of hours.

The technology continuously monitors the normal health of algae by tracking their volatile gas emissions through their growth and bloom cycle. When invading organisms or predators attack and induce stress, this results in a change to volatile gas signatures. Using CIMS, the scientists showed they can instantly detect the disruption and alert algae cultivators to take action to save the harvest.

“If you knew there was an attack on the crop, from insects or bacteria, then you could either mitigate the damage or pull the plug and harvest before there’s any damage done,” said Pomeroy, who works with chemist Mike Burkart and biologist Steve Mayfield iin the Food and Fuel for the 21st Century program. . “Bacteria are built to attack and eat the algae and their growth is exponential. You could be fine one day with nice green algae and the next day it’s a brown muddy mess. So this is not like losing 10 percent of your wheat crop—overnight you could lose the entire algae crop.”

The CIMS system, the researchers noted in their experiments, detected grazing contaminations by infectious organisms 37 to 76 hours earlier than traditional monitoring methods that have been used for years, including microscopy and fluorescence. More research will be conducted to further develop CIMS for algae field applications.

Professor Prather is the founding director of the National Science Foundation (NSF) Center for Aerosol Impacts on Chemistry of the Environment (CAICE), an NSF Center for Chemical Innovation.

“In CAICE, one of our main goals is to develop unique online analytical approaches to detect complex mixtures in biological and environmental systems,” said Prather. “This is an excellent example of how mass spectrometry that was developed for a different application, measuring gas phase ocean emissions, is now being used to address a problem of societal relevance. There are endless applications in the environmental and health fields for how these online mass spectrometry measurements can be used to tackle challenging problems.”

CIMS, the researchers indicate, could be adapted to monitor the health of other valued sources, including cheese, beer, monoclonal antibodies and certain laboratory-grown meats, all of which are susceptible to attacks from infectious organisms. 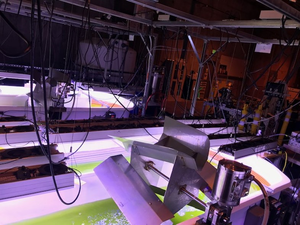