A joint research group led by Associate Professor Ryoichi Arai (Institute for Biomedical Sciences and Faculty of Textile Science and Technology, Shinshu University) and Assistant Professor Norifumi Kawakami (Faculty of Science and Technology, Keio University) developed a uniform and useful supramolecular protein nanoparticle symmetrically self-assembled from fusion proteins of a pentameric protein domain and a dimeric protein domain. It is possible to modify the functionality by site-specific mutagenesis or chemical modification. This designed protein nanoparticle with a diameter of about 22 nm was named TIP60 (Truncated Icosahedral Protein composed of 60-mer fusion proteins) because it is formed by self-assembling 60-meric artificial fusion proteins shaped like a soccer ball (N. Kawakami et al., Angew. Chem. Int. Ed. 57, 12400–12404, 2018).

In the present study, the joint research group solved the detailed three-dimensional structure of the TIP60 using single-particle cryo-electron microscopy. A large amount of TIP60 was expressed in E. coli, and a purified sample was observed at the cryo-electron microscope facility operated by Prof. Masahide Kikkawa lab at the University of Tokyo. By performing single-particle analysis based on obtained image data, a three-dimensional map was reconstructed with a resolution of 3.3 Å. It was revealed that TIP60 forms hollow spherical nanoparticles as designed and has an icosahedral 60-meric structure with 20 triangular-like pores with an edge of about 4 nm each. In addition, the group elucidated in detail the characteristic three-dimensional structure, such as the linker connecting the pentamer formation domain and the dimer formation domain composed of an α-helix.

In the future, the group will utilize artificially designed protein nanoparticles by advancing the design and functional modification of site-specific variants based on the three-dimensional structure of TIP60 elucidated in this study. It is expected to lead to the development and applications in the nanobiotechnology and nanomaterial fields, such as use as a nanocapsule for a drug delivery system. 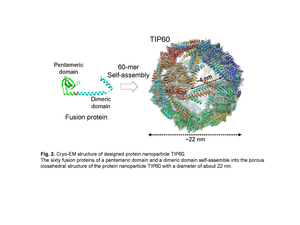