In a new LIFE project funded by the European Commission, the condition and habitats of freshwater pearl mussel (FPM) populations and their host fishes, Atlantic salmon and brown trout, will be improved in Finland, Sweden and Estonia. The project is being led by the University of Jyväskylä.

“We act geographically in the most essential area relative to the fate of FPMs,” says the project’s principal investigator, Professor Jouni Taskinen. “Species’ conservation efforts are especially fruitful here: the prevailing conditions remain favourable for sustainable reproduction and survival of FPMs in the future as well.”

As revival actions for FPM populations, specific habitats, known as “kindergartens”, are established in their home rivers to achieve a sustainable level of survival for the juvenile state mussels.

To rescue dying FPM populations, adult mussels are revived by taking them on “honeymoons” to the Konnevesi Research Station. In Estonia and Sweden, FPM juveniles are either bred in captivity or by assisted reproduction in their home rivers. It is estimated that all together 24,000 of these mussels will survive to adulthood.

Projects restoration actions include removing fish migration barriers and the improvement of the natural state of in-stream environments previously modified by human actions: original riverbeds will be rewatered, rapids and spawning beds restored, and wooden structures used to promote a diversity of waterflow conditions. To decrease solids and nutrition loads, buffer zones, sediment settling pools and wetlands will be built and catchment area soil limed.

In addition to the traditional methods for monitoring the status of FPM and salmonid populations and their habitats, new approaches will be used, such as shell opening resistance to estimate the physical condition of individual mussels, drone-based aerial surveys and dogs trained to find FPM populations.

To protect and save FPM populations, research knowledge will be disseminated via a range of training events and packages for stakeholders such as forestry and land use professionals and FPM knowledge will be spread also to a wider public via different media.

”For example, forest machine drivers need instructions on how to work in the vicinity of FPM rivers,” Taskinen says. “Sharing new knowledge and improved practices with stakeholders is a central part of the project.”

For the benefit of Finnish rivers

The project significantly improves the possibilities of FPMs to survive from future challenges in Finland.

“Stream waters have had it tough in Finland,” says Taskinen. “The project not only has a positive effect on FPM, but also on Finnish rivers and streams. LIFE Revives is a remarkable water conservation project, which promotes important, but very challenging efforts in improving the diversity of the steam water environment.”

Conservation is based on research

Although LIFE projects are primarily conservation projects, scientific research has a central role in them. The methods used in conservation actions, results and impacts are evaluated and monitored in ways that fulfil scientific criteria.

“The project puts the University of Jyväskylä and Finland on the cutting edge of international research,” says Taskinen.

The six-year LIFE Revives: Reviving freshwater pearl mussel populations and their habitats, led by the University of Jyväskylä, started on 1 September 2021. The total budget of the project is nearly EUR 15.9 million.

LIFE projects are large flagship initiatives in the field of environmental protection. In Finland, LIFE Revives is unprecedented in both budget and scale. According to Taskinen, this has required many years of preparation work with the project partners.

“Getting the grant shows trust in us by the European Commission,” says Professor Taskinen.

Project partners in addition to the University of Jyväskylä are Metsähallitus Parks and Wildlife Finland, Metsähallitus Forestry Ltd and Centres for Economic Development, Transport and the Environment of South Ostrobotnia, Pirkanmaa and Southwest Finland. The Swedish partners are the County Administrative Board of Norrbotten, the Swedish Anglers Association, SCA SKOG AB and Sveaskog Förvaltnings AB. The Estonian partners are the Estonia State Forest Management Centre and the University of Tartu. 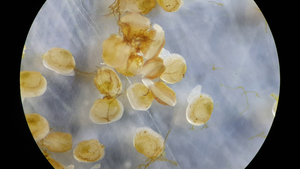