That’s according to new research from the University of East Anglia (UEA) and Brazil’s Universidade Federal do Mato Grosso do Sul, published today in the journal Scientific Reports.

The research team also estimated the carbon credit value of emissions from tropical forest communities who consume wild meat instead of domesticated livestock.

André Nunes from the Universidade Federal do Mato Grosso do Sul and Carlos Peres, Professor of Conservation Science at UEA, working with Brazilian and Danish colleagues, looked at people living in both Afrotropical and Neotropical countries, including Nigeria, Ghana and Tanzania, Brazil, Peru and Bolivia.

The team estimated potential revenues from the sale of associated carbon credits and how this could generate financial incentives for forest conservation and sustainable wildlife management through PES and REDD+ projects.

Payments for ecosystem services (PES) are a range of schemes through which the beneficiaries, or users, of ecosystem services provide payment to the stewards, or providers, of those services. Reduced Emissions from Deforestation and forest Degradation (REDD+) is a multilateral carbon credit trading mechanism enabling polluters in usually high-income countries to pay low-income countries for reducing deforestation and forest degradation.

Based on 150,000 residents in the Amazonian and African forests, the researchers found that an annual per capita consumption of 41.7kg of wild meat would spare 71 metric tons of carbon dioxide equivalent (MtCO2-eq) under a bovine beef substitution scenario, and 3 MtCO2-eq if replaced by poultry.

Prof Peres, a co-author in the study, said the calculations “represent considerable incentives for forest wildlife conservation, as well as potential revenues for local communities.

“Our results clearly illustrate the potential value and importance of considering sustainable game hunting within the REDD+ political process at both national and international scales.”

Tropical forest populations that harvest wild meat instead of beef, poultry or other domesticated meat generate a much lower carbon footprint because of the emissions associated with livestock production.

The livestock sector also disproportionally contributes to the environmental cost of agriculture through high resource misuse, including water, land, and soils.

Intact tropical forests act as carbon sinks, absorbing more carbon from the atmosphere than they release. Tropical forests fulfil an essential service by storing an estimated 460 billion tons of carbon, more than half the total atmospheric content.

Across the vast Amazon basin, for example, intact forest areas are concentrated mainly within indigenous territories and protected areas, which collectively store some 42 gigatonnes of carbon (GtC).

Prof Peres said: “Tropical grazeland expansion for ruminant livestock production to feed domestic meat consumption and exports is a double-jeopardy because we both lose the carbon stocks from formerly pristine old-growth forests and woody savannahs and generate a powerful perennial methane pump.

“Subsistence hunting of game animals by local communities, which is pervasive in tropical forests, needs to become a sustainable mechanism of both helping justify and add economic value to otherwise undisturbed forests in terms of low-carbon animal protein production.”

Wild meat provides nutritional and symbolic value for communities living in tropical forests. But, the researchers say, traditional hunting must be done sustainably, both to maintain intact forests and support the food chain.

Dr Nunes, lead author of the study, said: “Securing the sustainable consumption of wild meat for populations that are socially vulnerable is very important, not just in terms of food security and well-being, but also to serve the interests of climate change mitigation efforts in REDD+ accords through avoided greenhouse gas emissions.

On the other hand, hunting can provide a sustainable source of protein and essential micronutrients if appropriately monitored and managed. Forecasts predict widespread protein deficiency in a range of tropical countries, and case studies suggest increased risk of anaemia in children if wild meat is insufficient to the point where the prevalence of child growth stunting can be negatively related to game abundance.

‘Wild meat consumption in tropical forests spares a significant carbon footprint from the livestock production sector’ is published in Scientific Reports on October 7, 2021. 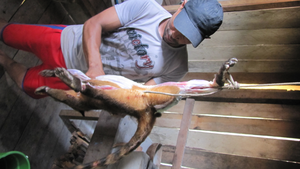 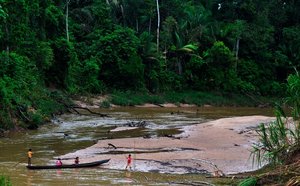