A team of biologists from Japan and the Philippines have identified three new species of goby fish, belonging to the genus Lentipes. They were described in a study published today in the journal, Systematics and Biodiversity.

One of the new species was found living in the Philippine archipelago of Palawan and has been given the Latin scientific name Lentipes palawanirufus, which translates as “red Lentipes goby of Palawan”. The other two new species were found in Okinawa, a sub-tropical island in Japan, and have been named Lentipes kijimuna and Lentipes bunagaya.

“The names were inspired by Kijimuna and Bunagaya, who are wood spirits in Okinawan folk mythology usually portrayed as having red hair or skin,” said Dr. Ken Maeda, first author of the study and staff scientist in the Marine Eco-Evo-Devo Unit at the Okinawa Institute of Science and Technology Graduate University (OIST). “Like their namesakes, these two new species have red markings on their body.”

Lentipes kijimuna was the first species discovered back in 2005, when Dr. Maeda found an unfamiliar-looking male goby fish while carrying out fieldwork for his PhD at the University of the Ryukyus.

“I was surprised by its fiery red head and lower body. The shape was similar to Lentipes armatus, which until now, was the only known Lentipes species in Japan, but the color pattern was completely different,” Dr. Maeda recalled.

Color patterning is an easily observable characteristic but the relationship between body color and species is not clear-cut. In some cases, two different fish species can look identical in color pattern, but at other times, fish from the same species can show many variations in color pattern, with each variant of fish known as a color morph.

To find out whether this fish was just a rare color morph of Lentipes armatus, or a new species entirely, the researchers needed to extensively examine its DNA. But first, they needed more specimens.

It wasn’t until 2010, after joining OIST as a researcher, that Dr. Maeda found three more male fish in Okinawa with the same unique red coloration and collected one of them for later study. And then in 2012, he made another discovery – a second color morph, also male. This one had two bands of red on the lower body.

Then, during surveys of freshwater fish in Palawan from 2015 to 2018 in a collaboration project between OIST and the Western Philippines University, Dr. Maeda found males that displayed a third variation in color, with a bright red head and a reddish-brown lower body.

Having finally collected enough samples, Dr. Maeda and his collaborators unraveled the evolutionary relationship between the differently-patterned fish. First, they analyzed all the DNA in the mitochondria, and then looked at specific locations across the whole genome, including the nucleus.

The researchers found no differences in the DNA from the mitochondria but found that tiny changes in DNA across the whole genome separated the fish into four distinct species, in line with their color patterns.

“We think that these fish must have diverged recently, so the mitochondrial genes haven’t had enough time to mutate,” said Mr. Hirozumi Kobayashi, a PhD student from the University of the Ryukyus who analyzed the nuclear DNA with his supervisor, Professor Kazunori Yamahira.

The researchers believe that the different color patterns of the Lentipes males play an important role in maintaining their separate lineages. The team reported that during courtship, males displayed a more vivid color than normal and exhibited special behavior that highlighted their specific color pattern when approaching females. The scientists suggest that the female may not accept males of the other species with different color patterns, although further studies are needed to verify this.

The scientists also hope to locate more specimens of Lentipes kijimuna and L. bunagaya on other islands in the South-East Asia region. Although Lentipes adults live and reproduce in small freshwater streams, the larvae are carried downstream into the ocean and can be transported by ocean currents to different remote islands.

“Lentipes kijimuna and L. bunagaya are rarely seen in Okinawa,” explained Dr. Maeda. “So we think that these species we encountered here were born somewhere else in Southeast Asia and transported to Okinawa when they were larvae.”

More intense evolutionary studies, as well as discovering the origin and geographic distribution of the gobies, could help shine light on how the larvae disperse. It could also help verify if female choice is one of the drivers for how these species have maintained their separate lineages and not interbred. Larval dispersal usually prevents new species from forming, as individuals from different populations have the chance to reproduce with each other. However, Lentipes gobies buck this trend, as they actually harbor a high level of species diversity.

“This paper helps to reveal the mystery of these Lentipes gobies,” said Dr. Maeda.  “But there’s still so much to find out.”

Do colour-morphs of an amphidromous goby represent different species? Taxonomy of Lentipes (Gobiiformes) from Japan and Palawan, Philippines, with phylogenomic approaches

No potential conflict of interest was reported by the author(s). 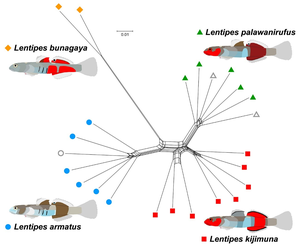 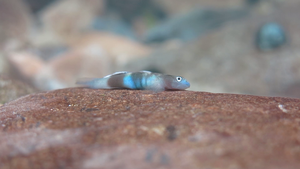 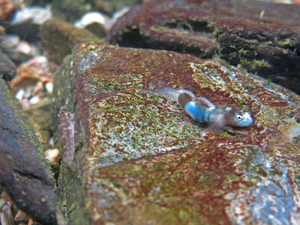