Not long after the dawn of complex animal life, tens of millions of years before the first of the “Big Five” mass extinctions, a rash of die-offs struck the world’s oceans. Then, for reasons that scientists have debated for at least 40 years, extinctions slowed down.

A new Stanford University study shows rising oxygen levels may explain why global extinction rates slowed down throughout the Phanerozoic Eon, which began 541 million years ago. The results, published Oct. 4 in Proceedings of the National Academy of Sciences, point to 40 percent of present atmospheric oxygen levels as a key threshold beyond which viable ocean habitat expands and the global extinction rate sharply falls.

“There’s a whole set of high-magnitude extinctions earlier in the history of animal life, and then they taper off until there’s just these huge mass extinctions. And there’s never been an explanation for why we have all those high-magnitude extinctions early on,” said senior study author Erik Sperling, an assistant professor of geological sciences at Stanford’s School of Earth, Energy & Environmental Sciences (Stanford Earth).

The new study reveals that even five degrees of warming – extreme for our current climate but common in Earth’s deep past – would be more than enough to trigger mass die-offs early in the Phanerozoic. The research shows this is because, in a low oxygen world, marine animals were already on the razor’s edge of their ability to breathe and maintain their body temperatures. The finding has implications for understanding the fate of ocean creatures in today’s warming world.

The authors used computer models of Earth’s climate to simulate seawater temperatures and the amount of oxygen that would be dissolved in the ocean as atmospheric carbon dioxide and oxygen fluctuated throughout the Phanerozoic. They paired these simulations with mathematical models of interactions between animal physiology and local environments, then estimated the proportion of marine animal types that would be lost with every 5 degrees Celsius of ocean warming, as would be expected from roughly every fourfold increase in atmospheric carbon dioxide. Such warming events are extreme but not infrequent throughout Earth history.

The approach allowed the authors to effectively populate virtual oceans with realistic organisms, then crank up the heat to see who would survive. “These are fully three-dimensional models with the physics of the water circulating around the continents in different configurations and all the biogeochemistry,” Sperling said. “That’s a huge computational advance.”

The results are consistent with a series of major extinction events during the first 50 to 100 million years of the Phanerozoic being a direct consequence of low oxygen levels and physiological responses to heat. “We don’t need to invoke something outside of climatic change to explain these anomalously severe extinction rates and anomalously common mass extinctions early in the animal fossil record,” said lead study author Richard Stockey, a Stanford PhD student in geological sciences.

The need, rather, is to consider how oxygen scarcity hindered the ability of animals to cope with heat. That’s because as oceans warm, their oxygen content declines while animals’ need for oxygen grows. This is particularly true for cold-blooded species that rely on the external environment to regulate body temperature and metabolism. “The way we looked at things puts oxygen change and temperature change in a common currency and evaluates them at once,” Sperling said. “We’re treating fossils as ancient living organisms and thinking about how they feed, live and breathe – how they get through a day.”

The researchers found several additional factors that influenced the proportion of species that died out during warmer periods over the past 541 million years, including the configuration of Earth’s continents, the efficiency of carbon cycling between ocean and atmosphere and the state of the climate at the start of a given warming event. However, “atmospheric oxygen is the dominant predictor of extinction vulnerability,” the authors write. “Changes in atmospheric oxygen were likely much more important than those other factors,” Stockey said.

The study reinforces previous findings from Sperling’s group that underline oxygen and temperature as interlocking keys to understanding extinction and survival patterns in ancient oceans. “The geological and paleontological record is telling us over and over that it is the combination of oxygen and temperature change that are the big killers for marine animals,” Sperling said.

In areas of today’s oceans that have low oxygen levels, including deeper waters of the continental margin off the California coast, any further drop in oxygen or change in temperature may be catastrophic for organisms that are already pushing the limits of their aerobic capacity. “Those are some of the places that are potentially in the gravest danger as climate change drives further ocean warming and deoxygenation,” Sperling said. “For the first hundred million years or so of animal evolution, almost the entire ocean was like that.”

The research was supported by the National Science foundation, the NASA Astrobiology Institute Early Career Collaboration Award, the Heising-Simons foundation and the European Union’s Horizon 2020 research and innovation programme under the Marie Sklodowska-Curie grant.

Why extinctions ran amok in ancient oceans, and why they slowed down 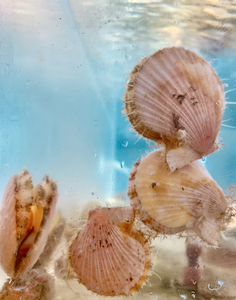