As much as a third of the world’s population does not have access to clean drinking water, according to some estimates, and half of the population could live in water-stressed areas by 2025. Finding a solution to this problem could save and improve lives for millions of people, and it is a high priority among scientists and engineers around the globe.

Scientists and engineers at The University of Texas at Austin have created a hydrogel tablet that can rapidly purify contaminated water. One tablet can disinfect a liter of river water and make it suitable for drinking in an hour or less.

“Our multifunctional hydrogel can make a big difference in mitigating global water scarcity because it is easy to use, highly efficient and potentially scalable up to mass production,” said Guihua Yu, an associate professor in the Cockrell School of Engineering’s Walker Department of Mechanical Engineering and Texas Materials Institute.

Yu and his team recently published their findings in the journal Advanced Materials.

Today, the primary way to purify water is to boil or pasteurize it. But that takes energy, plus a lot of time and work. That isn’t practical for people in parts of the world without the resources for these processes.

The process requires zero energy input and doesn’t create harmful byproducts. The hydrogels can easily be removed, and they don’t leave any residue.

In addition to purifying water on their own, the hydrogels could also improve a process that has been around for thousands of years — solar distillation, the use of sunlight to separate water from harmful contaminants via vaporization.

Solar distillation systems often run into issues of biofouling, the accumulation of microorganisms on equipment that causes it to malfunction. The bacteria-killing hydrogels can prevent this from happening.

“A highly vigilant graduate student, Youhong Guo, discovered these hydrogels unexpectedly while doing something else, that is purification of water with sunlight,” said Keith Johnston, a professor in the McKetta Department of Chemical Engineering who co-led the project.

The team is working to improve the hydrogels by increasing the different types of pathogens and viruses in water that they can neutralize. And the team is also in the process of commercializing several prototypes.

Scaling up the hydrogels would be straightforward, the researchers say. Materials for making them are inexpensive, and the synthesis processes are simple and remain that way at large scales. And they can easily control the shape and size of the hydrogels, making them flexible for different types of uses.

Youhong Guo, a graduate student in Yu’s lab, is the first author on the paper. Graduate students Christopher Dundas from chemical engineering and Xingyi Zhou from mechanical engineering were also part of the team. The research was supported by grants from the Energy Institute at UT Austin and the Dreyfus Foundation. 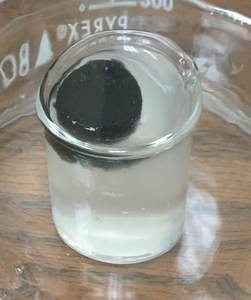