CHAMPAIGN, Ill. — In a study of crayfish in the Current River in southeastern Missouri, researchers discovered – almost by chance – that the virile crayfish, Faxonius virilis, was interbreeding with a native crayfish, potentially altering the native’s genetics, life history and ecology. Reported in the journal Aquatic Invasions, the study highlights the difficulty of detecting some of the consequences of biological invasions, the researchers say.

“The virile crayfish is probably the widest-ranging native crayfish in North America,” said study co-author Christopher Taylor, a curator of crustaceans at the Illinois Natural History Survey. Even though it’s native to North America, F. virilis is considered invasive in many parts of the U.S. because it quickly dominates new habitats when introduced – for example, by fishermen moving crayfish from one stream to another in a bait bucket, he said.

Taylor conducted the research with Eric Larson, a professor of natural resources and environmental sciences at the University of Illinois Urbana-Champaign, and Zachary Rozansky, a graduate student who led the research.

“The Ozarks in Missouri and Arkansas are just a great place to be a crayfish,” Larson said. “The streambeds are rocky so you can hide from fish predators, the water chemistry is good, there’s lots of calcium in the stream and there are a lot of groundwater springs that feed into the main river. That’s why there are so many native crayfish there.”

The virile crayfish was not native to the Current River watershed, however, and its presence could lead to declines in native crayfish species, he said.

Other invasive crayfish have disrupted the ecosystems they invade, Larson said. For example, the rusty crayfish is native to the Ohio River Basin but has invaded the waters of many other regions in the U.S. and Canada. It hybridizes with native crayfish, displacing them and reducing their reproductive output. It also consumes large quantities of aquatic plants and other invertebrates, undermining populations of some sport fish and crayfish species.

The virile crayfish was first detected in 1986 in the Current River, a pristine watershed, parts of which are administered by the U.S. National Park Service.

“The spread and impacts of an invasive species could cause substantial harm to this unique ecosystem,” Larson said.

The researchers hoped to determine the extent of the F. virilis invasion by collecting and identifying mitochondrial DNA from environmental samples, an emerging approach for invasive-species surveillance known as “environmental DNA,” or eDNA. However, as they started collecting crayfish for genetic analysis to develop their eDNA sampling method, they discovered a surprising problem.

This meant that the two species were hybridizing with one another, he said.

“We did not observe any differences in colors or patterns indicating they were hybrids,“ Rozansky said. “They looked like one or the other.”

The discovery should come as a warning to those using environmental DNA to look for an invasive species in an area with closely related native species, said Larson, whose laboratory specializes in the use of eDNA.

“It was by chance that we found an invasive crayfish that had native spothanded crayfish mitochondrial DNA,” he said. “Currently, most eDNA detection markers use mitochondrial DNA, so the results of this research highlight the possibility of missed detections of invasive species if hybridization is occurring.”

“Although it is rarely documented, researchers working with invasive crayfishes should not discount the possibility that the invaders are hybridizing with native species,” Rozansky said.

The implications for the native crayfish in the Current River system in Missouri are still unknown, the researchers said.

The INHS is a division of the Prairie Research Institute at the University of Illinois Urbana-Champaign.

The paper “Invasive virile crayfish (Faxonius virilis Hagen, 1870) hybridizes with native spothanded crayfish (Faxonius punctimanus Creaser, 1933) in the Current River watershed of Missouri, U.S.” is available online and from the U. of I. News Bureau. 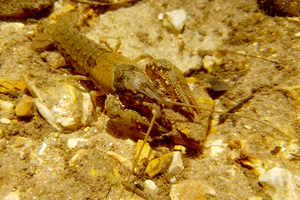 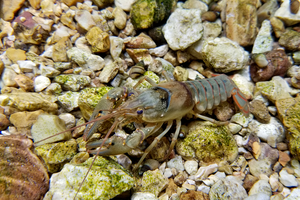 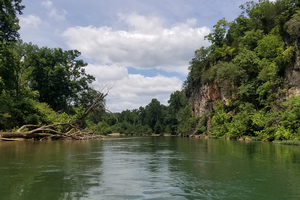 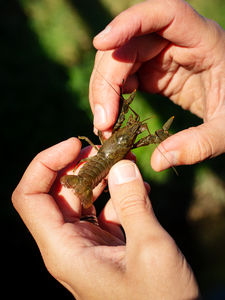 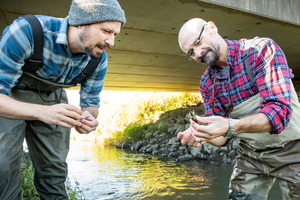