The availability of prey and the ability to adapt to changing environments played key roles in the evolution of sharks. A new study, in which over 3,000 shark teeth were analysed, provides new insight into how modern shark communities were established. The results are published in the journal Current Biology.

The new research investigated the diversity of shark teeth from the final stages of the Mesozoic (approximately 80 million years ago) to the present day. In particular, it sought to understand why there are only 15 species of mackerel sharks living today (scientific name: Lamniformes), whereas there are more than 290 species of ground sharks (Carcharhiniformes).

“The modern-day imbalance in diversity between mackerel and ground sharks has, until now, lacked a deep-time ecological perspective. However, if we look to the past, we see the opposite pattern: Lamniforms were more diverse than Carcharhiniforms,” says study leader Dr Mohamad Bazzi, previously a researcher at Uppsala University but now at the University of Zurich.

The evolution of sharks is a story told by their teeth. This is because most of what remains behind for palaeontologists to work on are shed teeth. As a result, researchers must seek innovative approaches to help us fill in the many gaps in knowledge relating to their past.

"Tooth morphology is a more direct proxy for the living habits of sharks and our study is the first attempt to explore how diet impacted lamniform and carcharhiniform sharks over the past 83 million years. By measuring the association between tooth shapes and diets from living sharks, we built a foundation for interpreting changes in diet in the fossil record," says Dr Bazzi.

The research team compiled an extensive database of over 3,000 shark teeth and then evaluated their shape. To attain a measure of shape diversity (or disparity as it is technically called) the study relied on a method known as geometric morphometrics, which is a type of mathematical shape analysis.

To understand the role played by diet in shaping the diversity of sharks, the team assembled previously published records of shark diets attained from stomach contents.

Many Cretaceous Lamniformes had specialised diets for eating marine reptiles and, following their loss at the end of the age of dinosaurs, these Lamniformes went extinct. On the other

As it turns out, the same extinction that killed off the non-bird dinosaurs may have set the stage for the modern shark community.

A similar event may have occurred only 5 million years ago to the largest shark ever to have existed, the lamniform megalodon (scientific name: Otodus megalodon).

Megalodon fossils are mostly from the Miocene (which spanned from approximately 23 to 5 million years ago). During this period, lamniform sharks had record-low tooth disparity. Megalodon likely specialised in eating the large whales of that time and so this low disparity again suggests that specialised diets among top predatory sharks may place them at a greater risk of extinction.

“Here, we have a good example of the important biological insights offered by studying fossils,” says Dr Nicolás Campione, co-author and member of the University of New England’s Palaeoscience Research Centre.

“Our research demonstrates that living Lamniformes are the result of repeated extinction events, perhaps resulting from a tendency to specialise. Dietary specialisation, on top of environmental changes, were likely major factors behind the previously mentioned imbalance between Lamniformes and Carcharhiniformes,” says Dr Campione.

“We now have evidence that the availability of prey and the ability of sharks to adapt to changing environments played an important role in their past evolution. These factors underpinned the modern diversity of sharks and, critically, will likely decide their survival into the future,” says Dr Bazzi.

The role of diet in the rise of modern shark communities 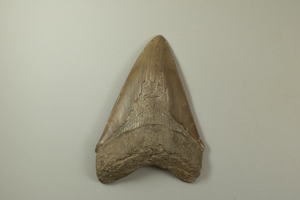 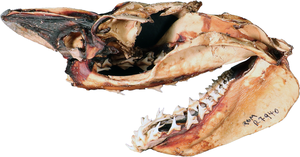 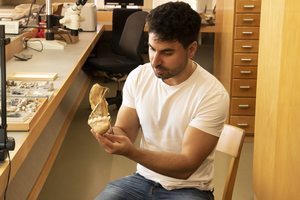