An innovative experiment design shows, in real time and at the scale of a single molecule, how stem cells slow their rolling inside the circulatory system by growing long tethers that attach to the inner surfaces of blood vessels. The strategy could help researchers to improve stem cell transplantations and to find new treatments for metastasizing cancers.

Many cells in the human body travel through blood vessels from one organ to another to carry out specific functions. For example, immune cells migrate to inflamed tissue and cancer cells spread to new organs. Stem cells also travel to new locations to develop into different tissues. “This stem cell 'homing,' where cells migrate to their new place of residence, is also essential for successful bone marrow transplantation for treating various diseases,” explains Satoshi Habuchi, who led the study.

Homing is a multistep process in which cells slowly roll over the inner lining of blood vessels, then adhere to the lining once they reach the site they are destined for, and finally transmigrate across the vessel wall into the tissue.

Scientists already knew that homing cells produce tethers containing ligands that can sense and bind to adhesion molecules on the blood vessel lining. Until now, however, scientists had not been able to directly visualize this rolling to understand exactly what happens at the molecular level.

Satoshi, Merzaban and their teams were able to mimic cell rolling by using a microfluidic system. “The tethering and rolling step of homing had previously been described as a simple binding between selectins on the endothelium and their ligands on stem cells,” says Ph.D. student Bader Al Alwan. “Our findings demonstrated that the initial step of homing is far more dynamic and complicated.”

The team found that individual microvilli on the surface of the homing cells elongate to form individual tethers. Ligands in the microvilli rapidly extend throughout the tethers so they can “sniff out” selectin in the blood-vessel lining. Once located, the ligands bind to the selectins, attaching the tether to the vessel lining. This helps the cell resist the full strength of the blood flow. As the blood flow exerts pressure on the top of the cell, it rolls forward, stretching the tether until it reaches a critical point when it breaks and flips forward to come in front of the cell. Now called a sling, it is used to slow down the cell so that it can look for the molecules that signal where its new home is.

“When we started, we did not expect that cell morphology played such a critical role in stabilizing cell rolling,” says Al Alwan. “We were also surprised by the extent to which the morphology changes, with some tethers merging into multiple ones and others stretching to more than ten times the length of the cell.”

“Our research is focused on understanding how various cells move in the body using adhesion systems. For example, one goal is to improve stem cell movement in the body so they can get where they are needed following transplantation or in other disease settings. We are also focused on understanding how and why cancer cells outperform normal cells in their ability to migrate so that we can develop methods to inhibit their metastasis. Using the sophisticated assays developed by Satoshi and his team, we also want to create a more precise map of the proteins that are present at each step of the homing and migration process to identify when and where they are important during migration,” says bioscientist Jasmeen Merzaban, the co-principal investigator of the study. 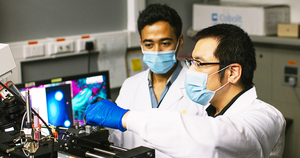 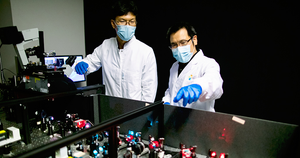