Two new species of venomous snakes were just added to Asia’s fauna – the Nujiang pit viper (Gloydius lipipengi) from Zayu, Tibet, and the Glacier pit viper (G. swild) found west of the Nujiang River and Heishui, Sichuan, east of the Qinghai-Tibet Plateau. Researchers from the Institute of Vertebrate Paleontology and Paleoanthropology at the Chinese Academy of Sciences and Bangor University published the discovery in the open-access journal ZooKeys as part of a new molecular phylogenetic analysis of the Asian pit vipers.

The Nujiang pit viper has a greyish brown back with irregular black ring-shaped crossbands, wide, greyish-brown stripes behind the eyes, and relativity short fangs, while the Glacier pit viper is blueish-grey, with zigzag stripes on its back, and has relatively narrow stripes behind its eyes.

Interestingly, the Glacier pit viper was found under the Dagu Holy-glacier National Park: the glacier lake lies 2000 meters higher than the habitat of the snakes, at more than 4,880 m above sea level. This discovery suggests that the glaciers might be a key factor to the isolation and speciation of alpine pit vipers in southwest China.

The researchers also share the stories behind the snakes’ scientific names: with the new species from Tibet, Gloydius lipipengi, the name is dedicated to the senior author’s (Jingsong Shi) Master’s supervisor, Professor Pi-Peng Li from the Institute of Herpetology at Shenyang Normal University, just in time for Li’s sixtieth birthday. Prof. Li has devoted himself to the study of the herpetological diversity of the Qinghai-Tibet Plateau, and it was under his guidance that Jingsong Shi became an Asian pit viper enthusiast and professional herpetological researcher.

Gloydius swild, the new species from Heishui, Sichuan, is in turn named after the SWILD Group, which studies the fauna and biodiversity of southewst China. They discovered and collected the snake during an expedition to the Dagu Holy-glacier.

On top of their discoveries, the researchers were also astonished by the sceneries they encountered during their field work. During their expeditions, they experienced striking views of “sacred, crystal-like” glacier lakes embraced by mountains, as well as colourful broadleaf-conifer forests and morning mists falling over the village.

“During our expedition, we met a lot of hospitable Tibetan inhabitants and enjoyed their kindness and treats, which made the expedition more unforgettable,” they add. 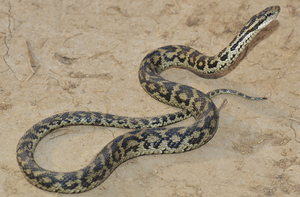 Glacier lake on the top of the mountain 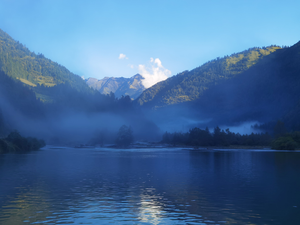 Misty morning near the habitat of Glacier pit viper