ALBUQUERQUE, N.M. — Sandia National Laboratories began studying the power of the sun to produce utility-scale energy in the 1960s. Sandia’s National Solar Thermal Test Facility was commissioned in 1978, spurred by the oil crisis of 1973.

Many of the documents detailing the design, construction and research conducted at the world’s first multimegawatt concentrating solar tower spent decades sitting in boxes or on shelves in basements and backrooms. Until now.

Sandia’s solar researchers and librarians have spent the past few years collecting, digitizing and cataloging a host of reports, memos, blueprints, photos and more on concentrating solar power, a kind of renewable energy produced by using large mirrors to reflect and concentrate sunlight onto a receiver on a tower to generate electricity. These historical research documents are now in a publicly accessible digital archive for other concentrating solar power researchers, historians, corporations and citizens to view.

“We believe being able to share this information will make the technology in general more accessible and the path to commercialization faster,” said Ken Armijo, a concentrating solar power researcher at Sandia and the project leader. “A lot of ‘what if’ questions can be answered if you look at what was documented back in the day. By having this information available, we’re saving the U.S. taxpayers money because new researchers and companies won’t need to reinvent the wheel.”

In addition to the tens of thousands of Sandia reports, hand-drawn diagrams, videos and massive floppy disks, the team worked with collaborators in Australia, South Africa, Germany, the U.S. Department of Energy and others to include their one-of-a-kind concentrating solar power documents from the same time period, Armijo said. The team hopes to expand the archive to include historical concentrating solar power documents from partners in other countries as well.

‘On the shoulders of giants’

Successful research projects are shared widely within the research community in the form of peer-reviewed papers, presentations and reports so that other researchers can learn from the results. However, the results of unsuccessful projects are often shared quietly from one person to another, Armijo said. This knowledge can be lost when a researcher retires and can lead to new researchers repeating the mistakes of the past out of ignorance.

“As we were looking through these paper-based documents, we found that there were 20,000 to 50,000 documents that had never been digitized, and if one day there was a big flood or a fire, all of that information would be gone,” Armijo said. “Over the years Sandia has been involved in a lot of significant, impactful, even seminal research in concentrating solar power. The idea was to digitize and organize all of this invaluable material into an archive available to everyone so that researchers could learn what had been done — what were the successes and failures of the early research so that we don’t risk making those same mistakes again.”

Some of these seminal projects include Solar One, a 1981 Sandia-led project with Rocketdyne, now Aerojet Rocketdyne, to deliver 10 megawatts of electricity to Barstow, California. The concentrating solar power tower operated from 1982 to 1986. In 1995, Sandia and Rocketdyne upgraded the tower to Solar Two, using a new high-temperature molten-salt receiver capable of storing heat to convert into electricity after the sun went down. Solar Two operated from 1996 to 1999. Earlier this year, Sandia received a $25 million award from DOE to build a third-generation, particle-based concentrating solar power plant with even more storage capacity. Documents from the archive could inform this third-generation plant.

In addition to these significant renewable energy research projects, Sandia’s solar tower has been used in research for NASA, defense testing and assisted with solar energy commercialization.

From ‘Down Under’ to the World Wide Web

The focus of the ANU researchers from the 1970s onward was on solar dish technology for concentrating sunlight, said Joe Coventry, a concentrating solar power engineer with ANU and the Australian Solar Thermal Research Institute.

White Cliffs is a tiny, remote town about 12 hours northeast of Sydney that was completely off the electrical grid when the concentrating solar power project started, Coventry added. The White Cliffs concentrating solar power plant operated autonomously from 1983 to 1994, when the town was connected to the national grid. After the White Cliffs project, ANU researchers focused on much larger solar dish prototypes and ammonia-based energy storage systems for several decades. Several of ANU’s early projects were collaborations with Sandia.

Coventry will mail about a half-dozen boxes of physical documents from these early projects to Armijo and his team to digitize and add to the archive.

“We have a set of beautifully hand-drawn diagrams of some of the early dish designs and the designs for the world’s first demonstration solar plant station in White Cliffs,” Coventry said. “For some of these pioneering designs, there’s only one copy of the drawing in the world. To have the opportunity for those to be digitized and available for people to look at online, is quite exceptional.”

He also included strategy and vision documents — the most interesting finds, in his opinion — project proposals and other reports across the ocean to be digitized.

“The world is moving to decarbonize, and concentrating solar power has a really important role in providing low-cost energy storage and to decarbonize energy-intensive industrial processes,” Coventry said. “Seeing how it all started out is really quite interesting, and Australia had its part, but it’s really hard to track the history on innovation if the documents aren’t accessible online.”

In addition to access from the primary digital archive, the digitized concentrating solar power documents can also be accessed by DOE’s Office of Scientific and Technical Information library and Sandia’s SAND report library, Armijo said.

Between the stacks in the library

All of this would not have been possible without the work of a team of technical librarians.

Shannon O’Grady, one of these technical librarians, constructed the user interface and the database for the concentrating solar power archive. Annette Chavez, another member of the library team, uploaded all the digitized documents onto Sandia’s servers.

Technical librarian Alice Parsons has been working on the external documents from DOE and international partners to make sure that the documents’ metadata is compatible with the archive and Sandia’s library catalog. Sandra Pacheco, the library’s authority on Sandia reports, did the same thing with the metadata for Sandia documents and made sure that they were accessible through the DOE library.

“Making these mostly forgotten documents accessible to colleagues and collaborators globally is really exciting,” said Parsons. “There are so many golden nuggets of information in these old documents that could prove invaluable to current researchers. Hopefully the archive will encourage collaboration and reduce the likelihood of research being inadvertently repeated.”

One of these golden nuggets, in Armijo’s opinion, were documents on molten sodium research from 1981.

“My research is in molten sodium and heat transfer liquids, so it was very exciting to find sodium concentrating solar research done the year I was born,” Armijo said. “And I’m designing the same kind of thing right now. It was like looking into someone’s mind from 40 years ago. I was able to read those documents and use the information they learned back then right away to make progress on my research.”

These documents can provide a lot of value to the research and commercialization communities. Parsons said that she would be thrilled if the archive helps concentrating solar power become a commercial success faster than it would have otherwise.

Next, Armijo will work to digitize one-of-a-kind video reels of concentrating solar power research. Armijo also hopes to expand the archive to include one-of-a-kind historical documents for other areas of renewable energy research.

“I feel that there’s not one silver bullet in renewable energy,” Armijo said. “Concentrating solar power is just one technology of many, such as wind, photovoltaic, geothermal, hydropower. I’m hoping that as this archive takes off, we’re able to add more and more information, not just reports but videos, engineering drawings and more.”

This archive project is funded by the Department of Energy Solar Energy Technologies Office and was started by Chuck Andraka, a retired Sandia engineer. 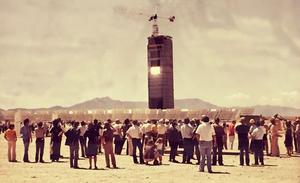