The COVID-19 pandemic has brought RNA vaccines to the forefront of public attention. The rapid mutations of the virus and the urgent need to control its spread have made researchers keen to find ways to design more efficient vaccines to package and deliver the information needed by the immune system. Molecular glues provide a way to condense, inactivate, and protect genetic material like DNA and RNA for the formulation of vaccines. Protamine, a protein that regulates the packaging of DNA in sperm cells, is one such molecular glue. But thus far there has been little understanding of the mechanism underlying protamine-induced DNA condensation.

In a recent study published in ACS Nano, a group of researchers led by Prof. Yoonhee Jang of Daegu Gyeongbuk Institute of Science and Technology, Korea and Prof. Yves Lansac of GREMAN CNRS laboratory in the Department of Physics, University of Tours, France developed a model to understand the condensation and decondensation of DNA induced by protamine in semidilute solutions. They found that protamine formed transient bridges between DNA, which induced attraction and allowed the compaction of DNA into bundles. They further found that ‘overcharging’ the solution with protamine extinguished the attraction, leading to DNA decondensation. “By carrying out an idealized simulation that incorporated only electrostatic and steric interaction, we were able to show that DNA condensation is reversibly regulated by modulating the ratio between positively-charged protamine and negatively-charged DNA. This result provides explicit demonstration of the long-time proposition that DNA packaging crucially relies on the non-specific nature of electrostatic interaction,” explains Prof. Jang. The results of their simulations corresponded with lab-based experimental observations.

Understanding the mechanism of protamine-induced DNA condensation could provide valuable information on the development of sperm cells and their related fertility. Moreover, the basic design principles underlying the mechanism of protamine-induced DNA condensation could be used to fine-tune the formulation of vaccines and other gene-based therapies. According to Prof. Lansac, “Recent mRNA vaccines to prevent viral infections and cancers use protamine as packaging/de-packaging agents. Thus, this work can be extended to study mRNA packaging/de-packaging controlled by protamine derivatives.”

The ultimate subcellular art of packing 2-meter long DNA in a human cell is now understandable through the miracles of science, which promises to be of value for future discoveries. As Prof. Jang observes, “We believe that understanding and simulating the molecular-level principles underlying such fascinating and dynamic processes as DNA packaging will not only bring us one step closer to unraveling the origin of life, but also have applications in various other fields such as medicine, materials, and energy.”

The world certainly welcomes such insights into this marvelous molecular glue we all carry in our cells!

Yun Hee Jang is a professor at the Department of Energy Science and Engineering, Daegu Gyeongbuk Institute of Science and Technology (DGIST), Korea. Yves Lansac is a professor at the GREMAN CNRS laboratory at the Department of Physics, University of Tours, France. They met while working as postdoctoral scholars at the Materials and Process Simulation Center at the California Institute of Technology. Since then, they have worked together on the application of multiscale molecular modeling and computer simulations for the study of equilibrium and non-equilibrium self-organization in soft matter systems such as liquid crystals, colloids, polymers, and biomaterials.

Packing with protamine: Insights into a high-performance molecular glue holding DNA together 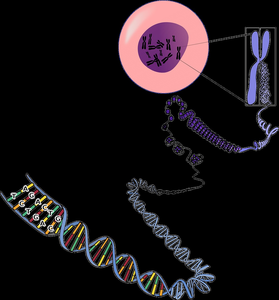