Flakes of paint could be one of the most abundant type of microplastic particles in the ocean, new research has suggested.

Through a range of surveys conducted across the North Atlantic Ocean, scientists estimated that each cubic metre of seawater contained an average of 0.01 paint flakes.

This, they say, suggests the material is second only in terms of recorded abundance to microplastic fibres, which have an estimated concentration of about 0.16 particles per m3.

A detailed chemical analysis of some of the flakes, conducted on some of the particles gathered during the surveys, also revealed high quantities of copper, lead, iron and other elements.

This is because they are designed to have antifouling or anti-corrosive properties, with the researchers saying it could pose an additional environmental threat to both the ocean and many species living within it when they ingest the particles.

The study, published in Science of the Total Environment, was carried out by scientists from the University of Plymouth and the Marine Biological Association (MBA).

Over the past two decades, the organisations have collaborated on a number of ocean plastics projects, and in 2019 demonstrated there had been a significant increase in open-ocean plastics since the late 1950s.

Dr Andrew Turner, Associate Professor (Reader) in Environmental Sciences at the University of Plymouth, is the current study’s lead author. He said: “Paint particles have often been an overlooked component of marine microplastics but this study shows that they are relatively abundant in the ocean. The presence of toxic metals like lead and copper pose additional risks to wildlife.”

The study is based around data gathered by the MBA’s Continuous Plankton Recorder (CPR), which is fitted with silk meshes and towed in surface waters similar to the spaces occupied by marine mammals.

Over the course of 2018, it was used to sample sea water right across the North Atlantic region, from the Arctic Ocean to Spain, and from the eastern United States to Sweden.

More than 3,600 samples were collected during that time and flakes were reported in about 2.8% (102) of all silks analysed. That compares with fibres or strands being observed in 48.8% (1763) of silks over the same period.

Paint flakes also appeared to be more densely distributed around the shelf seas of northwest Europe than in the open, or more remote, ocean environments.

An analysis of the paint particles was carried out in labs at the University using X-ray fluorescence (XRF) spectrometry, with their chemical composition consistent with that found on the hulls and other painted components of ships mobilised in the Atlantic region.

Dr Clare Ostle, the co-ordinator of the Pacific Continuous Plankton Recorder (CPR) Survey at the MBA and co-author on the study, added: “We now know that plastics are everywhere, and that most organisms are likely ingesting them, however there is less known about how harmful this ingestion might be. This study has highlighted that paint flakes are an abundant form of microplastic that should not be overlooked, particularly as some may have toxic properties.” 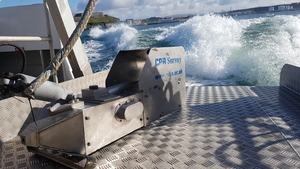