Nature is full of repeating patterns that are part of the beauty of our world. An international team, including a researcher from the University of Washington, used modern tools to explain repeating patterns of stones that form in cold landscapes.

The new study, published Oct. 5 in the Proceedings of the National Academy of Sciences, uses experimental tools to show how needles of ice growing randomly on frozen ground can gradually move rocks into regular, repeating patterns. The team, based mainly in China and Japan, uses a combination of novel experiments and computer modeling to describe these striking features with new theoretical insights.

“The presence of these amazing patterns that develop without any intervention from humans is pretty striking in nature,” said co-author Bernard Hallet, a UW professor emeritus of Earth and space sciences and member of the Quaternary Research Center. “It’s like a Japanese garden, but where is the gardener?”

Hallet specializes in studying the patterns that form in polar regions, high-mountain and other cold environments. One of the reasons for the patterns is needle ice. As the temperature drops, the moisture contained in the soil grows into spikes of ice crystals that protrude from the ground.

“When you go out in the backyard after a freezing night and you feel a little crunch under the foot, you’re probably walking on needle ice,” Hallet said.

As needle ice forms it tends to push up soil particles and, if there are any, small stones. More needle ice can form on patches of bare soil compared to rock-covered areas, Hallet said. The ice needles will slightly displace any remaining stones in the barer region. Over years, the stones begin to cluster in groups, leaving the bare patches essentially stone-free.

“That kind of selective growth involves interesting feedbacks between the size of the stones, the moisture in the soil and the growth of the ice needles,” Hallet said.

Hallet had previously reviewed another scientific paper by first author Anyuan Li, formerly at Shaoxing University and now at the University of Tsukuba in Japan. The two began a collaboration that mixes Hallet’s longtime expertise investigating patterns in nature with Li and his collaborators’ background in experimental science and computer modeling.

Senior author Quan-Xing Liu at East China Normal University uses fieldwork and lab experiments to understand self-organized patterns in nature. For this study, the experimental setup was a flat square of wet soil a little over 1 foot on each side (0.4 meters) that began with stones spaced uniformly on the surface. The researchers ran the experiment through 30 freeze-thaw cycles. By the end of that time, regular patterns had started to appear.

“The videos are pretty striking, and they show that the ice just comes up and in a single cycle it pushes up stones and moves them slightly to the side,” Hallet said. “Because of those experiments and the abilities of the individuals involved to analyze those results, we have much more tangible, quantitative descriptions of these features.”

The research was funded by the Second Tibetan Plateau Scientific Expedition and Research program; the Japan Society for the Promotion of Science; the National Natural Science Foundation of China; the Chinese Academy of Sciences; and the China Scholarship Council.

How ‘ice needles’ weave patterns of stones in frozen landscapes 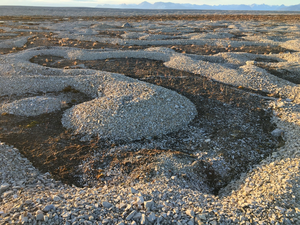 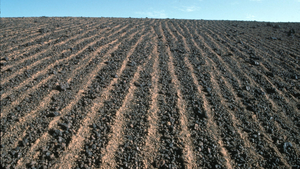