The dwarf planet Vesta is helping scientists better understand the earliest era in the formation of our solar system. Two recent papers involving scientists from the University of California, Davis, use data from meteorites derived from Vesta to resolve the “missing mantle problem” and push back our knowledge of the solar system to just a couple of million years after it began to form. The papers were published in Nature Communications Sept. 14 and Nature Astronomy Sept. 30.

Vesta is the second-largest body in the asteroid belt at 500 kilometers across. It’s big enough to have evolved in the same way as rocky, terrestrial bodies like the Earth, moon and Mars. Early on, these were balls of molten rock heated by collisions. Iron and the siderophiles, or ‘iron-loving’ elements such as rhenium, osmium, iridium, platinum and palladium sank to the center to form a metallic core, leaving the mantle poor in these elements. As the planet cooled, a thin solid crust formed over the mantle. Later, meteorites brought iron and other elements to the crust.

Most of the bulk of a planet like Earth is mantle. But mantle-type rocks are rare among asteroids and meteorites.

“If we look at meteorites, we have core material, we have crust, but we don’t see mantle,” said Qing-Zhu Yin, professor of earth and planetary sciences in the UC Davis College of Letters and Science. Planetary scientists have called this the “missing mantle problem.”

In the recent Nature Communications paper, Yin and UC Davis graduate students Supratim Dey and Audrey Miller worked with first author Zoltan Vaci at the University of New Mexico to describe three recently discovered meteorites that do include mantle rock, called ultramafics that include mineral olivine as a major component. The UC Davis team contributed precise analysis of isotopes, creating a fingerprint that allowed them to identify the meteorites as coming from Vesta or a very similar body.

“This is the first time we’ve been able to sample the mantle of Vesta,” Yin said. NASA’s Dawn mission remotely observed rocks from the largest south pole impact crater on Vesta in 2011 but did not find mantle rock.

Because it is so small, Vesta formed a solid crust long before larger bodies like the Earth, moon and Mars. So the siderophile elements that accumulated in its crust and mantle form a record of the very early solar system after core formation. Over time, collisions have broken pieces off Vesta that sometimes fall to Earth as meteorites.

Yin’s lab at UC Davis had previously collaborated with an international team looking at elements in lunar crust to probe the early solar system. In the second paper, published in Nature Astronomy, Meng-Hua Zhu at the Macau University of Science and Technology, Yin and colleagues extended this work using Vesta.

“Because Vesta formed very early, it’s a good template to look at the entire history of the Solar System,” Yin said. “This pushes us back to two million years after the beginning of solar system formation.”

It had been thought that Vesta and the larger inner planets could have got much of their material from the asteroid belt. But a key finding from the study was that the inner planets (Mercury, Venus, Earth and moon, Mars and inner dwarf planets) got most of their mass from colliding and merging with other large, molten bodies early in the solar system. The asteroid belt itself represents the leftover material of planet formation, but did not contribute much to the larger worlds.

The work was partly supported by the Science and Technology Development Fund, Macau, the Deutsche Forschungsgemeinschaft and NASA.

Olivine-rich achondrites from Vesta and the missing mantle problem

Dwarf planet Vesta a window to the early solar system 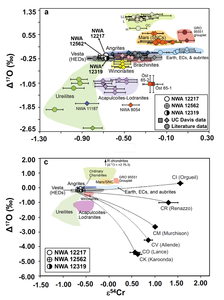 Dwarf Planet Vesta a Window to the Early Solar System