New research by SFU archaeologists could help forensic teams in their work to estimate the age of the remains of children discovered during archaeological work or in criminal investigative cases. Their study is published in the journal Forensic Science International.

While age is typically determined by dental records or other methods, such as measuring the long bones in the upper or lower limbs, those methods may not always be possible, especially in the case of young children. The researchers turned their attention to another approach—measuring the crania and mandibular bones, located in the skull.

For their study, researchers measured those bones in the child skeletal remains of known sex and age from natural history museum collections in Lisbon, Portugal and London, U.K. The bones were from 185 children from birth to 12.9 years who lived during the 1700s to 1900s. The measurements were found to provide a valid and comprehensive approach to juvenile age estimation.

According to SFU forensic anthropologist Hugo Cardoso, age, in combination with sex, context, and other characteristics of the skeleton, helps to narrow down who the child could be from a list of potential candidates. Families can then provide a DNA sample to confirm the identity of the child whose remains have been found, leading to closure for the family.

“Estimating the age of child remains is important because it helps with identification purposes, especially in criminal investigations,” says study lead Deanna Smith, an SFU archaeology MA student and member of the Wikwemikong First Nation. Determining the age of remains can help to reduce the pool of possibilities from a list of hundreds of missing children of various ages, for example.

Researchers assist in various situations where identification of remains is sought, from criminal investigations to cases with insufficient medical records to estimate age. “As physical anthropologists, we’re often called to identify found human remains, which then are subjected to a medicolegal death investigation,” says Cardoso, chair of the Department of Archaeology and co-director of the Centre for Forensic Research. “We are also involved in the study of remains found intentionally in archaeological projects, such as excavating a prehistoric or historic cemetery.”

Cardoso adds that in other archaeological contexts, excavating cemeteries can provide a snapshot of the entire population within a certain period of time and geographical area, allowing researchers to learn more about how people lived in the past—and age determination is a key factor. “Estimating age can help researchers to reconstruct demographics of the population and gain a better understanding of aspects of nutrition, health and stress during the growth years.” 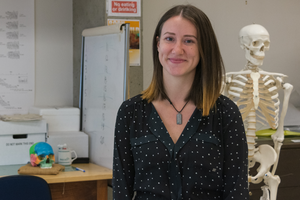