Virginia Tech scientists have improved their method to map the zebrafish brain -- an advance that could improve understanding of how the human brain functions.

“A wiring diagram of the brain would be a powerful tool to understand diseases of connectivity,” said Yuchin Albert Pan, the Commonwealth Research Commercialization Fund Eminent Research Scholar in Developmental Neuroscience at the Fralin Biomedical Research Institute at VTC. “Autism spectrum disorder, for example, is characterized by a loss of long-distance connections and increase in local connections. Most neuropsychiatric disorders have connectivity aspects. ”

Although human brains are more complex, zebrafish brains share a common architecture as do all vertebrates. Determining the structure and function of cells called neurons and how they connect within the brain and between the brain and other structures such as the eye could provide clues to more precisely treat neurological diseases and eye injuries.

Until now, the use of viral vectors in zebrafish has been limited because the viruses, such as rabies or adeno-associated virus, often used by scientists to transfer molecules to cells in mammals, are not effective in fish.

To overcome this limitation, Virginia Tech scientists tried and validated the use of VSV to trace connection patterns in neurons in zebrafish. The virus was engineered to label excitatory and inhibitory neurons that are connected via a nanoscopic structure called the synapse.

Before this study, the researchers had been successful with the approach, but the improved, second-generation version of the technique used a mutant version of VSV that was less toxic and longer-lived in the cells, making visualization of the connected neurons and the analysis of that connectivity possible up to five days after infection.

“This is really exciting, because now we can not only record activity, but we also know something about the cell types involved, and how they connect,” said co-lead author Manxiu “Michelle” Ma, a neurophysiologist and formerly a postdoctoral research associate in the Pan lab. “The unique viral tracer benefits from reduced cytotoxicity, which enables the virus-infected neurons to maintain their cellular integrity and express a fluorescent indicator to reveal neuronal activity during visual stimulation. Furthermore, this technique can also define the neuron type, for example, if the neuron during a visual stimulus is an excitatory neuron or an inhibitory neuron.”

Stanislav Kler, a virologist and co-lead author of the study who was also a postdoctoral research associate in the lab, said, “The connectivity patterns between most neuronal types are mostly unknown. This gap in knowledge underscores the critical need for effective neural circuit mapping tools. This will get us a step closer to understanding how the brain stores and processes information and how we can manipulate these circuits for better health.”

The research is especially significant for vision research.

“To restore vision after diseases or injury that affect the eye itself including the cells in the eye that project to structures deep within the brain for subsequent processing of the visual world, the eye needs to connect to the right places in the brain,” said Pan, who is a member of the Fralin Biomedical Research Institute’s Center for Neurobiology Research. “The small size and translucency of larval zebrafish are a unique experimental system to investigate whole brain neural circuits. Scientists working on vision regeneration can now look at whether there is functional connectivity.”

The study was supported by the National Eye Institute of the National Institutes of Health, the Commonwealth Research Commercialization Fund, and Virginia Tech. 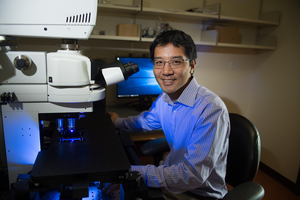