BUFFALO, N.Y. — On a night dive off the coast of St. John in the U.S. Virgin Islands in 2016, two coral reef researchers saw something unexpected: A coral colony with slender, waving branches was releasing larvae into the water.

While this method of reproduction isn’t unusual, the behavior in question was surprising because the coral was one called Plexaura kükenthali.

For decades, scientists had debated whether P. kükenthali was its own species, or the same species as another coral called Plexaura homomalla. Because P. homomalla was known to send sperm and eggs into the water — not fully formed larvae — the 2016 sighting added a new dimension to the conversation.

“While I had always wondered if the two forms were really two species, that was the moment we realized they had to be different,” says University at Buffalo professor and coral scientist Howard Lasker, who made the 2016 observation with UB PhD student and coral scientist Angela Martinez Quintana.

A more definitive call, however, would require additional evidence.

So, are these corals one species, or two?

It seems like an esoteric question: What, exactly, is a species?

“You’ll never get to a great answer, and different people will tell you different things,” says Jessie Pelosi, a 2019 UB graduate in environmental geosciences and biological sciences. “With P. kükenthali and P. homomalla, there’s been this conflict in terms of are they different species, or are they just one and the same in reality? They were described as separate species, then merged together, and then separated again.”

Pelosi set out to learn more after hearing about this history from Mary Alice Coffroth, another UB professor and coral scientist, and Lasker. Both encouraged Pelosi to explore the topic further through an undergraduate research project at UB, with the goal of assessing, more comprehensively, whether the two corals were indeed two different species, as people were now saying.

With Coffroth and Lasker as advisers, Pelosi assembled an interdisciplinary team from UB, The University of Rhode Island and Auburn University to take an in-depth look at P. kükenthali and P. homomalla.

The result is a new study published on Sept. 20 in the journal Coral Reefs.

“I think all the data suggests that they are two separate species,” says Pelosi, the first author, who completed the research at UB and is now pursuing a PhD in biology at the University of Florida. “We looked at a bunch of different factors, including morphological, genomic, reproductive and symbiotic differences.”

Morphologically, the team saw variation in the shape and size of calcium carbonate structures called clubs and spindles that each species produces. In addition, the scientists identified “strong genetic differences across the genome between the two species,” and observed differences in the timing and method of reproduction, Pelosi says. Finally, he adds, P. kükenthali and P. homomalla tend to host different types of algae as symbionts.

The research builds on a 1998 paper in the journal Avicennia by Pedro García-Parrado and Pedro M. Alcolado, who characterized P. kükenthali and P. homomalla as separate species after examining some aspects of their morphology, and depth preferences.

Pelosi points out that “there are some interesting intricacies happening,” with some overlap between the two species’ features. For example, some clubs and spindles on P. kükenthali and P. homomalla are very similar, even if overall trends in shape and size point to a difference in morphology. Also, researchers discovered one coral colony that appears to be a hybrid between P. kükenthali and P. homomalla, suggesting that interbreeding between these closely related species still occurs, although the frequency of this phenomenon is unknown.

Still, taken together, the evidence points to P. kükenthali and P. homomalla being distinctive species, Pelosi and Lasker say.

“It’s a really nice study because it cuts across so many different modes,” says Lasker, PhD, a professor of geology and of environment and sustainability in the UB College of Arts and Sciences, and senior author on the new paper. “It just points in some ways to how little we know about these animals.” (Yes, corals are animals.)

Pelosi notes that beyond simple curiosity, understanding the biology of soft corals like P. kükenthali and P. homomalla is important for practical reasons: “We’re seeing that in some areas, octocorals, or soft corals, seem to be able to better withstand the effects of climate change than stony corals, or hard corals. So, soft corals are really important players in preserving reef biodiversity and providing habitat for reef fishes and small invertebrates such as snails and shrimps.”

Corals once thought to be a single species are really two, study concludes 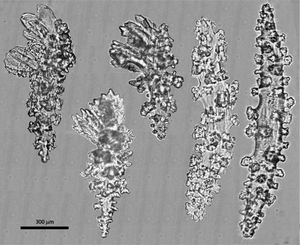 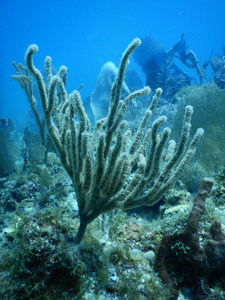