Leading a double life in water and on land, frogs have many breathing techniques – through the gills, lungs, and skin – over the course of their lifetime. Now German scientists have developed another method that allows tadpoles to “breathe” by introducing algae into their bloodstream to supply oxygen. The method developed, presented October 13 in the journal iScience, provided enough oxygen to effectively rescue neurons in the brains of oxygen-deprived tadpoles.

“The algae actually produced so much oxygen that they could bring the nerve cells back to life, if you will,” says senior author Hans Straka of Ludwig-Maximilians-University Munich. “For many people, it sounds like science fiction, but after all, it’s just the right combination of biological schemes and biological principles.”

Straka was studying oxygen consumption in tadpole brains of African clawed frogs (Xenopus laevis) when a lunch conversation with a botanist sparked an idea to combine plant physiology with neuroscience: harnessing the power of photosynthesis to supply nerve cells with oxygen. The idea didn’t seem far-fetched. In nature, algae live harmoniously in sponges, corals, and anemones, providing them with oxygen and even nutrients. Why not in vertebrates like frogs?

To explore the possibility, the team injected green algae (Chlamydomonas renhardtii) or cyanobacteria (Synechocystis) into tadpoles’ hearts. With each heartbeat, the algae inched through blood vessels and eventually reached the brain, turning the translucent tadpole bright green. Shining light on these tadpoles prompted both algae species to pump out oxygen to nearby cells.

After distributing algae to the brain, the researchers isolated the tadpole’s head and placed it in an oxygen bubble bath with essential nutrients that would preserve the functioning of the cells, allowing the team to monitor neural activity and oxygen levels. As the researchers depleted oxygen from the bath, the nerves ceased firing and fell silent. However, illuminating the tadpole head restarted the neural activity within 15 to 20 minutes, which is about two times faster than replenishing the bath with oxygen without the algae. The revived nerves also performed as well or even better than before oxygen depletion, showing that the researchers’ method was quick and efficient.

“We succeeded in showing the proof of principle experiment with this method. It was amazingly reliable and robust, and in my eyes, a beautiful approach,” says Straka. “Working in principle doesn’t really mean that you could apply it at the end, but it’s the first step in order to initiate other studies.”

While the researchers think their findings may someday lead to new therapies for conditions induced by stroke or oxygen-scarce environments, such as underwater and high altitudes, algae are far from ready to enter our blood circulation. The team’s next step is to see whether the injected algae can survive inside living tadpoles and continue oxygen production without causing an immune response that wreaks havoc on the animals.

Straka also envisions his research benefiting other laboratories that work with isolated tissues or organoids. Introducing oxygen-producing algae could help these tissues thrive and raise their survival rates, potentially reducing the need for live animals for experiments.

“You have to have new ideas and new concepts to explore; this is one of the ways science is driven,” says Straka. “If you are open-minded and think it through, all of a sudden, you can see all the possibilities from one idea.”

This work was supported by German Science Foundation, the German Federal Ministry of Education and Research, and the Munich Center for Neuroscience.

iScience (@iScience_CP) is an open-access journal from Cell Press that provides a platform for original research and interdisciplinary thinking in the life, physical, and earth sciences. The primary criterion for publication in iScience is a significant contribution to a relevant field combined with robust results and underlying methodology. Visit http://www.cell.com/iscience. To receive Cell Press media alerts, contact press@cell.com. 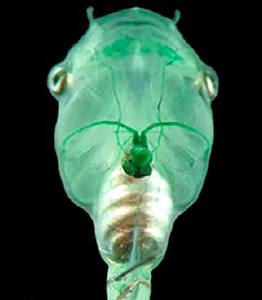