A 70-year-old model used to predict the microstructure of materials doesn’t work for today’s materials, say Carnegie Mellon University researchers in Science. A microscopy technique developed by Carnegie Mellon and Argonne National Laboratory yields evidence that contradicts the conventional model and points the way towards the use of new types of characterizations to predict properties — and therefore the safety and long-term durability — of new materials.

If a metallurgist discovered an alloy that could drastically improve an aircraft’s performance, it could take as long as twenty years before a passenger would be able to board a plane made of that alloy. With no way to predict how a material will change when it is subjected to the stressors of processing or everyday use, researchers use trial and error to establish a material’s safety and durability. This lengthy process is a significant bottleneck to materials innovation.

Professors Gregory Rohrer and Robert Suter of Carnegie Mellon University’s Department of Materials Science and Engineering and Department of Physics have uncovered new information that will help materials scientists to predict how the properties of materials change in response to stressors such as elevated temperatures. Using near-field high energy diffraction microscopy (HEDM), they found that the established model for predicting a material’s microstructure and properties does not apply to polycrystalline materials and a new model is needed.

To the eye, most commonly used metals, alloys and ceramics used in industrial and consumer equipment and products appear to be uniformly solid. But at the microscopic level, they are polycrystalline, made up of aggregates of grains that have different size, shapes and crystal orientations. The grains are tied together by a network of grain boundaries that shift when exposed to stressors, changing the material’s properties.

When they make a new material, scientists need to control its microstructure, which includes its grain boundaries. Materials scientists manipulate the density of grain boundaries in order to meet different needs. For example, the structure surrounding the passenger cabin in a car is made of an ultrahigh strength steel that contains more grain boundaries than the aesthetic body panels in the car’s front-end crumple zone.

For the last 70 years, researchers have predicted materials’ behavior using a theory that says that the speed at which grain boundaries move throughout a heated material is correlated to the boundary’s shape. Rohrer and Suter have shown that this theory, formulated to describe the most ideal case, does not apply in real polycrystals.

Polycrystals are more complicated than the ideal cases studied in the past. Rohrer explained, “If one considers a single grain boundary in a crystal, it can move without interruption, like a car driving down an empty roadway. In polycrystals each grain boundary is connected to, on average, ten others, so it’s like that car hit traffic — it can’t move so freely anymore. Therefore, this model no longer holds.” On top of that, Rohrer and Suter found that often polycrystal grain boundaries weren’t even moving in the direction that the model would have predicted.

HEDM, a technique that was pioneered by Suter and colleagues using the Argonne National Laboratory’s Advanced Photon Source (APS), was key to these discoveries. HEDM and its associated techniques allow researchers to non-destructively image thousands of crystals and measure their orientations within opaque metals and ceramics. The technique requires high energy X-rays available only at one of a few synchrotron sources around the world.

“It’s like having 3D X-ray vision,” said Suter. “Before, you couldn’t look at a material’s grains without cutting it apart. HEDM allows us to noninvasively view the grain orientations and boundaries as they evolve over time.”

The development of HEDM began around 20 years ago and continues to this day. Suter’s group worked with scientists at APS to develop procedures for the synchronized collection of thousands of images of X-ray diffraction patterns from a material sample as it undergoes precision rotation in an intense incident beam. High performance computer codes developed by Suter’s research group convert the sets of images into three dimensional maps of the crystalline grains that make up the material microstructure.

While the current analysis is based on a single material, nickel, X-ray diffraction microscopy is being used on many materials and Rohrer and Suter believe that many of those materials will demonstrate similar behavior to that seen in nickel. Similar applications to other material processing conditions also are being studied.

This research was funded by the National Science Foundation’s Designing Materials to Revolutionize and Engineer the Future program (DRMEF). The team’s four-year grant was renewed for $1.8 million dollars effective October 1, 2021. Carnegie Mellon’s Kaushik Dayal, Department of Civil and Environmental Engineering, Elizabeth Holm, Department of Materials Science and Engineering, and David Kinderlehrer, Department of Mathematical Sciences will also be involved in the next steps of research studying how and why polycrystals behave this way in different materials. Professors Carl Krill (University of Ulm, Germany) and Amanda Krause (University of Florida) are also part of the collaboration. 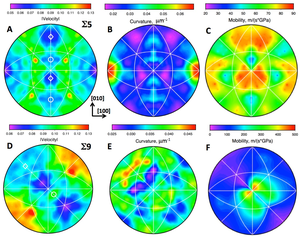