Mahahual is a small fishing village in the Mexican Caribbean that receives a large number of tourists every year. Over the past 15 years, its population has increased rapidly, and, as a result, people have started to settle in areas away from the main center of the village, sometimes encroaching on jaguar habitats. As most of those people keep guard dogs on their properties, jaguars have taken advantage of this situation by wandering near people’s houses at night, and sometimes those dogs end up as a night-time snack for the big cats.

Unlike jaguar attacks on livestock, attacks and predation on other domestic species such as dogs have only been documented anecdotally (through interviews or from remains found in faeces). Such attacks can indeed lead to pet predation conflict, which can ultimately have a negative impact on the jaguar populations. Attachment to pets may lead humans to start killing the big cats, which is of particular concern for an endangered species like the jaguar. Furthermore, it is possible that a wide range of pathogens may be transmitted from dogs to jaguars, further threatening the health of jaguar populations in Mahahual.

This is why a multidisciplinary team made up of veterinarians, conservationists, locals, NGOs (Aak Mahahual A.C. and International Fund for Animal Welfare (IFAW)) and researchers (El Colegio de la Frontera Sur and Universidad Tecnológica de Calakmul), led by Dr Jonathan Pérez Flores, began investigating the occurrence of jaguar predation and attacks on dogs at the Mexican Caribbean tourist site from almost 10 years ago. Their research was just published in the open-access journal Neotropical Biology and Conservation.

According to their report, the behaviour of Mahahual's jaguars resembles that of Indian leopards, which have already turned dogs into an important component of their diet, preferring them over livestock. Jaguars and leopards usually attack from a blindside, biting the dogs on the neck or head to avoid counterattacks. Similarly to leopards, jaguars attack at night and kill more dogs during the dry season. This is likely due to the fact that it’s easier for jaguars to hunt dogs than their natural prey: armadillo, lowland paca, brocket deer, white-tailed deer. Furthermore, the latter are less available during the dry season.

In 2017, the people of Mahahual partnered with Aak Mahahual A.C. and IFAW to build protective night houses made of wood and wire mesh meant to keep dogs safe at night. So far, they’ve built 38 such houses to prevent jaguar attacks. Sterilisation and vaccination campaigns have also been intensified since late 2020 to prevent the transmission of diseases between the two species.

Thanks to this study, we now have a better understanding of the adaptability and persistence of jaguars in human-dominated landscapes and the impact of dog predation by jaguars. However, the authors call for more research in the area to help paint the full picture.

Man's best friend could be a jaguar's next meal: A case study from the Mexican Caribbean 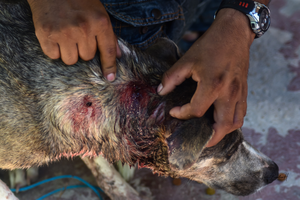 Dog injured as a result of jaguar attack 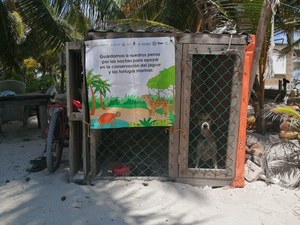