If you're going apple picking this fall, you may find yourself being drawn to the biggest, brightest, and most aromatic apples you can find. Apple trees and other fruit-bearing plants have evolved to produce such appetizing fruit for a reason: to entice people and wild animals to eat their fruit and disperse their seeds.

Several researchers in the lab of Susan Whitehead, an assistant professor of biological sciences in the College of Science, have been studying seed dispersal to understand how chemicals impact interactions between fruit and the animals that eat them.

In a new paper, which was published in the journal Trends in Ecology and Evolution, the lab describes the intricacies of the chemical ecology of seed dispersal and how future studies could shed more light on this little-known, but important subject.

“Our understanding of the chemical ecology of seed dispersal is still pretty basic. A lot of the chemicals in fruits haven’t yet been described, and we know very little about the functions that these chemicals may have,” said Annika Nelson, a postdoctoral associate in the Whitehead lab and the lead author of the paper. “There is so much research potential in this field, and I hope that our paper will spark conversations between chemical ecologists and other researchers who study seed dispersal.”

Just like humans, plant parents want their offspring to be successful after they leave the metaphorical nest. To have the highest chance of success, seeds need to be planted away from their parents to minimize competition for water, nutrients, and light. Plants, however, are rooted in the ground and often unable to disperse their seeds on their own.

If plants want their seeds to make it far in life, they have to get creative.

Fruit-bearing plants enclose their seeds in eye-catching, delicious fruit in the hopes that animals will eat them, carry them by foot or flight, and defecate them in a new location. To attract potential seed dispersers, plants use chemicals termed secondary metabolites, which give fruit their distinct aroma, color, and flavor, and may also serve as essential nutrients for animals.

However, the plants must choose the timing of their attraction carefully. If plants are constantly attracting animals, they will eat the parent plant’s seeds before they are ready to go out into the world. To avoid this, some plants use secondary metabolites to notify seed dispersers when it's time for them to harvest a fruit.

“Ripe fruits are often a lot smellier and tastier than unripe fruits on purpose,” said Nelson. “It communicates to animals when fruits are ready to be removed. If seeds are removed from a plant before they are fully developed, they often won’t survive.”

Plants need to be cautious. These repelling secondary metabolites could also prevent seed dispersers from eating and dispersing their seeds entirely. Essentially, plants must strike a careful balance between attracting animals to distribute their seeds and protecting their seeds against animals or viruses that may attack and kill them.

The Whitehead lab has found an intriguing seed dispersal mechanism in the forests of Costa Rica. Piper sancti-felicis plants, which are broad-leaf shrubs with unique spear-like fruit clusters, are forcing its primary seed dispersers, Seba's short-tailed bats, to eat just half a fruit before spitting it on the ground.

Whitehead thinks that ants may hold the key.

“Half-eaten fruits dropped below a bat roost are very rapidly discovered and carried away by ants,” said Whitehead, who is an affiliate of the Translational Plant Sciences Center, an arm of the Fralin Life Sciences Institute. “Ants often consume just the fruit pulp and discard the clean seeds right outside their nest. We think this second stage of the seed dispersal process might increase the chance of seed survival.”

If it wasn’t clear before, there are many relationships that exist between plants, fruits, chemicals, and their animal dispersers. According to Nelson, there are so many factors to consider in each seed dispersal system that it can be difficult to measure the impacts of secondary metabolites on plant seed dispersal success in a systematic way.

“The Seed Dispersal Effectiveness framework divides seed dispersal into different steps, such as when and how many seeds are first removed or when and where seeds are eventually deposited, that are easier to individually measure,” said Nelson. “The benefit of this framework is that you can use it to tackle separate pieces of the seed dispersal process and then put them all together in the end to quantify how many seeds an animal is effectively dispersing for a plant.”

The Whitehead lab plans to travel to Costa Rica in the fall to continue their research on the secondary dispersal of the Piper sancti-felicis fruits by ants.

Nelson is also studying bloodroot, a native herbaceous plant in Virginia that produces bright red, highly toxic alkaloids in their roots, leaves, and fruits. So far, she has found that in addition to defending the plant against attack, these alkaloids appear to deter seed-dispersing ants. The plant seems to adjust its alkaloid production in fruits depending on whether it's more advantageous to guard the fruit or attract an animal to disperse its seeds. 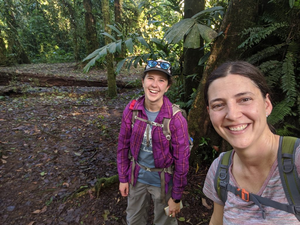