Female giant water bugs lay their eggs on a male's back after mating and the male takes care of the eggs until the nymphs are hatched, a couple of weeks later. A study led by Dr. Tomoya Suzuki of Kyoto University, formally of Shinshu University conducted a genome-wide analysis on the giant water bug, Appasus japonicus collected across the Japanese Archipelago, Korean Peninsula, and mainland China. Japan is considered a global hot spot of biodiversity and is an interesting region to research wildlife due to its complex geological history.

The Tsushima Strait divided Japan from the mainland Eurasian Continent about 1.55 million years ago, and this timeline matches the species diversification found from genotype by sequencing analysis of the mitochondrial DNA COI region, and analyses of SSR and GRAS-Di methods. There was also strong surprising evidence of the paraphyly of the Japanese variant of the water bug that suggested the lineage distributed in the Japanese Archipelago subsequently found their way to the Eurasian Continent.

Interestingly, the morphology of the male copulatory organ between the continental population differs from the Japanese population. This was announced by this same research group in 2013. Due to their lock-and-key anatomical difference, the males from Japan cannot mate with females from the Eurasian Continent although males from the Eurasian Continent can mate with females in Japan. Surprisingly, phylogenetic distance does not predict premating reproductive isolation.

This is one of the key factors for speciation. Therefore, the structure of the copulatory organs and their functionality is an important topic in the evolution and diversification of organisms. Because speciation takes hundreds of thousand years to millions of years, it is rare to find a species in the process of becoming completely separate species.

As a side note, one may assume that the giant water bug father is carrying only his own offspring on his back. However, when researchers examined the genome of the offspring, they found just 65% of its offspring belonged to the caring father. Females tend to want to lay their eggs on a male who is already carrying eggs on his back. A female will lay about 50 eggs while the male's carrying capacity is 150.

Corresponding author Professor Koji Tojo of Shinshu University states that "this is a rare finding where the process of lineage evolution and the degree of reproductive isolation does not match. This also makes us re-examine one of the greatest pillars of biology and the concept of species."

Mismatch between phylogenetic distance and the degree of reproductive isolation 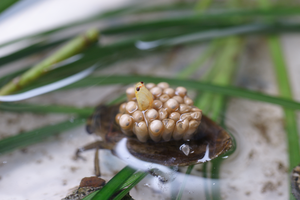 Offspring emerges from the egg on a male’s back 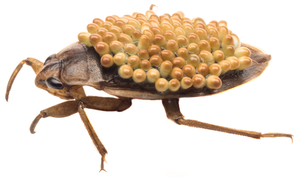 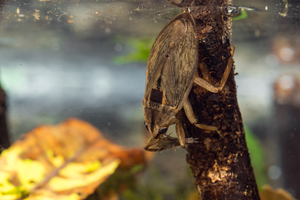 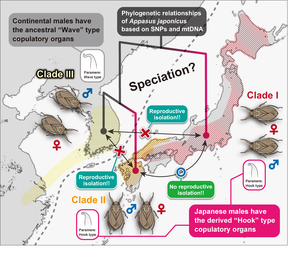 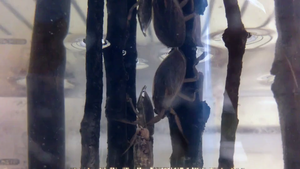 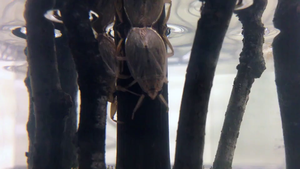