Materials consisting of a few atomic layers display properties determined by quantum physics. In a stack of such layers, vibrations of the atoms can be triggered by infrared light. New experimental and theoretical work shows that atomic vibrations within the layers of hexagonal boron nitride, the so-called transverse optical phonons, couple directly to motions of the layers against each other. For a period of some 20 ps, the coupling results in a frequency down-shift of the optical phonons and their optical resonance. This behavior is a genuine property of the quantum material and of interest for applications in high-frequency optoelectronics.

Hexagonal boron nitride consist of layers in which covalently bonded boron and nitrogen atoms form a regular array of six-rings (Fig. 1). Neighboring layers are coupled via the much weaker van der Waals interaction. Vibrations of boron and nitrogen atoms in the layer, the so-called transverse optical (TO) phonons, show an oscillation frequency on the order of 40 Terahertz (THz, 4×1013 vibrations per second) which is ten to hundred times higher than that of shear and breathing motions of the layers relative to each other. So far, there was nearly no insight into the lifetime of such motions after optical excitation and into their coupling.

An international collaboration of scientists from Berlin, Montpellier, Nantes, Paris and Ithaca (USA) now presents detailed experimental and theoretical results on ultrafast dynamics of coupled phonons in few-layer hexagonal boron nitride (Physical Review B 104, L140302 (2021)). Transverse optical (TO) phonons in a stack of 8 to 9 boron nitride layers display a lifetime of 1.2 ps (1 ps = 10-12 s), while shear and breathing modes show a decay time of 22 ps (Fig. 2b). Such lifetimes were directly measured in femtosecond pump-probe experiments and are in very good agreement with values derived from a theoretical analysis of the phonon decay channels.

Excitations of shear and breathing modes induce a characteristic spectral down-shift of the TO phonon resonance in the optical spectra (Fig. 2a). Theoretical calculations give the coupling energy between the different modes of the layer stack and show that the corresponding coupling is negligibly small in a bulk boron nitride crystal consisting of many layers. Thus, the observed coupled vibrational dynamics represent a genuine property of the quantum material.

The spectral shift of the TO phonon resonance in the optical spectra is a nonlinear optical effect which can be induced by light of moderate power. This is of interest for applications in optoelectronics and holds potential for optical modulators and switches in the giga- to terahertz frequency range. 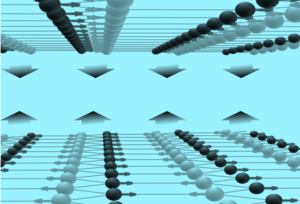 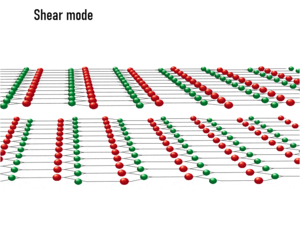 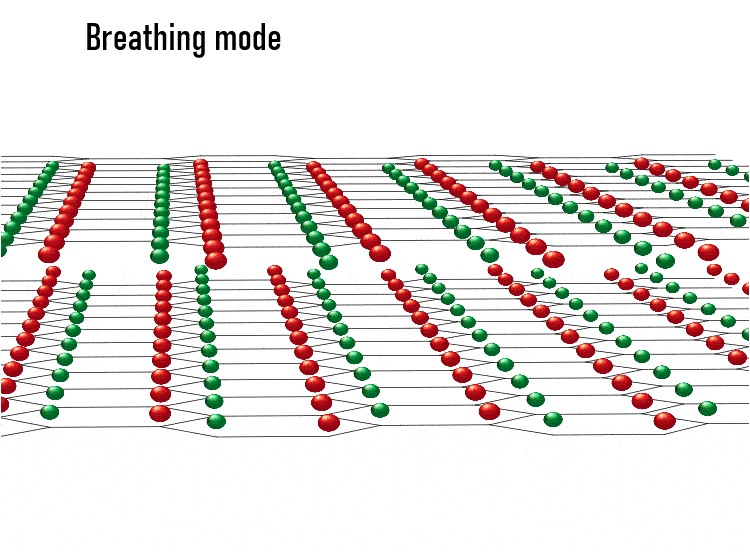