Genova (Italy), October 13th 2021 - Educating children and pre-adolescent is sometime a difficult task for adults, oscillating among different educational attitudes, such as a decisive tone or a dialogical one. Researchers at IIT-Istituto Italiano di Tecnologia (Italian Institute of Technology) tried to address two important questions at the basis of the relationship between adults and children: what kind of decision children are able to take while interacting with adults? Are they influenced by adults’ opinions? Researchers studied the behavior of about 65 children aged 6, 8 and 10 years old during a collaborative perceptual decision-making task with an adult partner. Results suggest that 10-year-old children, but not younger ones, do follow social norms, such as mutual endorsement, while exchanging opinions with an adult partner. These findings may have important implications at the educational level both in the scholastic and in the domestic domain, opening crucial questions about the efficiency of different educational attitudes towards children and pre-adolescents.

The research study has been recently published in Royal Society Open Science by researchers of Alessandra Sciutti’s group, composed by Joshua Zonca and Anna Folsø, at the IIT in Genova (Italy). Sciutti is the coordinator of the project Whisper (investigating Human Shared PErception with Robots), funded by European Research Council (ERC), whose aim is understanding how human decisions and judgments can be easily biased by the social context and how to translate this phenomena into human-robot interactions.

Researchers focused on the fact that human decisions are influenced by others’ opinions and that this process is regulated by social norms. For instance, adults give more credit to the opinion of peers who have previously endorsed their ideas, whereas they are less willing to trust people who do not take into consideration their opinions. In this way, social norms push people to conform to others’ ideas to control their reputation and maintain fruitful social relationships with peers. But what about children?

“In our research study we tried to understand if children follow the same social norms than adults. Do they always trust adults’ opinions, due to their higher experience and competence? Or even children requires adults to adhere to certain social norms in child-adult interactions, expecting considerations from adults for their ideas?” explains Alessandra Sciutti, coordinator of the research study.

Researchers studied the behaviour of a group of about 65 children aged 6, 8 and 10 years old during a joint perceptual decision-making task with an adult partner. During the task, the child and the adult made perceptual judgments and then took turns in making a final decision, choosing whether to confirm their own judgment or to conform to the one of the partner. In half of the experiment (Susceptible condition), the adult took into high consideration the child’s judgments, changing often opinion in her final decision to conform to that of the child. In the other half of the experiment (Unsusceptible condition), the adult did not consider the child’s opinion and confirmed very often her own response. The children’s final decisions in the two conditions were compared to investigate the impact of the adult’s behavior on children’s choices.

“Our results may have important implications in the study of children development”, comments Joshua Zonca, first author of the study and researcher at IIT. “Children tend to behave more like adults when they are 10-years old, giving more relevance to adults’ opinions if adults give them credit, while younger children trust more their own decisions, independently of adults’ behavior”.

Results show that 10-year-olds reciprocated the consideration received from the adult partner, increasing their level of conformity to the adult’s opinions when the partner had shown high consideration towards them. Conversely, when the adult ignored their opinion, they started in turn to consider less the adult’s judgment. Younger children (6- and 8-year-olds) tended to refuse the adult’s advices independently of the level of conformity shown by the adult partner, suggesting that reciprocity in social influence scenario emerges at a later stage of cognitive and social development.

These results shed light on the development of the cognitive and normative mechanisms modulating reciprocal social influence in child-adult interaction. Children of 10 years of age can engage in reciprocal behavior when exchanging opinions with an adult partner. At this age, children start to react to the consideration they receive from adults and are more willing to take into account the opinion of someone who listens to, rather than ignores, them.

Furthermore, these results suggest that children of 10 years of age appear to be already sensitive to those social norms regulating the exchange of information emerging among adults, as already shown by recent findings of the same research group, published on Scientific Reports, revealing the emergence of reciprocal social influence in adult groups.

Researchers believe these findings will have important implications at the educational level both in the scholastic and in the domestic domain, opening crucial questions about the efficiency of different educational attitudes towards children and pre-adolescents.

I’m not a little kid anymore! 10-year-old children act like adults, giving more credit to the opinion of adults who have previously endorsed their ideas. 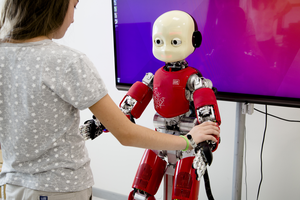 I’m not a little kid anymore