Researchers at the University of Cincinnati are using geology and rainfall patterns to track migratory wide-ranging hawks and falcons across North America.

The fall migration sees hundreds of thousands of birds of prey travel vast distances from where the birds fledged. This creates a daunting challenge for scientists who want to know more about their critical habitats.

Brooke Crowley, a professor of geology and anthropology in UC’s College of Arts and Sciences, has used isotopic analysis to track jaguars in Belize and extinct lemurs in Madagascar, among many similar projects. Her father, a retired science teacher and lifelong falconer, inspired her to undertake this study.

Using an innovative combination of isotopes from the feathers of kestrels, goshawks and other predatory birds called raptors, researchers can learn where the young birds hatched and learned to fly.

The international collaboration was published in the journal Ecosphere.

Strontium is a naturally occurring element found everywhere on Earth. It is released from rocks into the water and soil where it gets into the food chain. By taking the ratio of two types of strontium isotopes found in the secondary flight feathers of the birds and comparing with geology maps of North America, researchers could narrow down where the birds mostly likely hatched.

“Because hydrogen and strontium isotope ratios are controlled by very different variables, they are highly complementary,” the researchers said in their study.

Crowley said each map is informative on its own. But by overlaying the two, researchers can pinpoint the most likely origins of the birds with surprising precision.

A similar analysis of feathers collected from young birds still in the nest validated their methods.

Isotopes offer several advantages to track the movement of animals, said study co-author Clement Bataille, an assistant professor at the University of Ottawa. They provide a natural marker, so there is no need to use external devices. Likewise, isotopes are preserved long after an animal dies.

“This is the most important quality of isotopes,” Bataille said. “It provides a way to reconstruct pre-industrial mobility habits of species and to understand if humans have an impact on migratory bird mobility.”

Technology is leading to smaller and smaller tracking devices to follow the migration of living creatures, Bataille said. But these devices can only track the future movements of animals.

“There is really no possibility to reconstruct the mobility of dead individuals other than with isotopes,” Bataille said. “So, I think isotopes will be really critical to understand how breeding grounds might have changed in comparison with present-day.”

And that could help biologists and conservationists make better decisions about preserving critical habitat, he said.

Biologists have placed unique bands on the legs of birds to track individuals for scientific studies dating back to John James Audubon in the 1800s.

Scientists track birds using a variety of methods. Some attach light-sensitive geolocators to continent-hopping migratory birds like bar-tailed godwits that fly nonstop from Alaska to New Zealand. The tags record the hours of daylight, letting researchers know the latitudes of the birds on their north-south migrations.

Haak and other researchers use GPS or radio telemetry. By placing a radio transmitter on captured birds, Haak can follow their daily movements. But there are limitations to this method, Haak said. The equipment is expensive. And the wide-ranging birds can be difficult to track even with the benefit of technology.

“Some of the Cooper’s hawks and red-tailed hawks that I tracked went to Colima, Mexico, which is roughly 2,000 miles south of my Idaho trap site,” Haak said. “While I learned the migration routes and wintering destinations of these subjects, I had no idea where they were coming from.”

“Unlike telemetry and other tracking devices, when you sample a feather, it records the history of where that bird has been,” Crowley said.

The project was supported by a grant from the North American Falconers Association, a UC Undergraduate STEM Experiences award and a National Sciences and Engineering Research Council of Canada Discovery Grant. 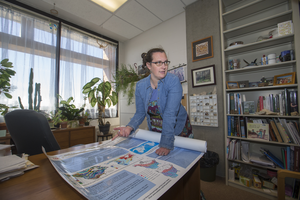 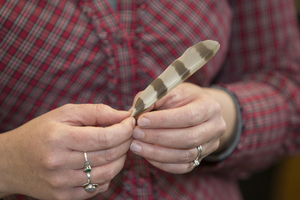 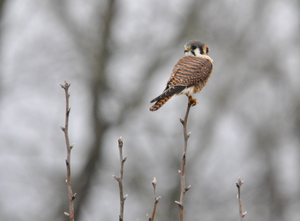