The German Research Center for Geosciences (GFZ) has set up a task force and sent a team to La Palma to contribute to the rapid assessment of volcanic eruptions and earthquakes on the islands. Together with experts in Potsdam and Spain, the researchers are investigating the interaction of the eruption with the quakes and surface deformations. They are using on-site measuring instruments and satellite images as well as data and software from the worldwide earthquake measuring network GEOFON.

After fifty years of dormancy and a three-year seismically active phase, a new volcanic eruption began on September 13, 2021, at Cumbre Vieja on the island of La Palma. Using satellite radar, GFZ researchers detected large-scale deformations indicating a pressure increase beneath the surface. The starting point of the eruption was on the central western flank of the Cumbre Vieja volcanic ridge, just a short distance north of the 1949 eruption. The lava flow is now 6300 meters long, in places over 1000 meters wide and at some places up to over 25 meters thick. It has destroyed over 600 houses and numerous roads. The lava reached the coast on September 28, 2021.

GFZ volcano researcher Thomas Walter says: "From what we hear from our team there, the situation there is still tense. Not only do enormous ash clouds form at the eruption crater, the contact of the lava, which has a temperature of over 1000 degrees Celsius, with the seawater causes the water to evaporate and also the salt molecules it contains. These react to form gases, some of which are toxic and corrosive." He therefore strongly warns against going near the lava stream without protective equipment. One must reckon with other dangers, such as sudden explosions of vapor gases or fine ash and glass particles that are carried over many kilometers by the strong wind. The newly forming delta in the sea grows visibly, but can give way and break off again unexpectedly.

The earthquakes shift with increasing magnitudes back to the south, to the center of the Cumbre Vieja. The complex events are not easy to decipher. Therefore, the GFZ has assembled a team of experts to assess the situation using both remote sensing data and computer analysis, as well as data collected in the field. Nicole Richter, Alina Shevchenko and Carla Valenzuela Malebran, scientists in the GFZ-section Physics of Earthquakes and Volcanoes and members of the task force, had left just a few days after the eruption began, numerous scientific instruments such as seismometers, inclinometers, drones and thermal cameras in their luggage.

Already the journey turned out to be surprising and difficult, the La Palma airport was closed at short notice, a detour via Tenerife followed. In the meantime, the researchers have arrived on site, the first stations are online and running. This work was made possible through collaboration within the GFZ, and is closely intertwined with the activities of other institutes in Spain and in Germany. For example, researchers from the GFZ and the GEOMAR Helmholtz Centre for Ocean Research in Kiel are planning a combined survey of events on land (GFZ) and in the sea (GEOMAR). Also, the first seismic data are now received at GFZ and simultaneously transmitted to the partner IGN in Spain. This helps determine the location of the increasing earthquakes.

The first results are promising. They show an accumulation of the earthquakes at a depth of about 12 km, far away from the eruption source. Do they indicate a magma chamber? How are the eruptions related to the earthquakes and surface deformation? These are the questions that the GFZ’s geophysicists and volcanologists are investigating together with their Spanish and German colleagues. Thomas Walter: "It is still too early to say whether and how this eruption will develop, whether there will be further eruption centers - as it was usual with past eruptions on La Palma - or whether the volcano will soon lay itself to rest again. The great success of the science and local authorities is already that, despite the relatively large eruption and destruction, there was no property damage."

The Canary Islands were formed by volcanism and still showed morphological and structural changes in their recent geological past, such as large explosions, slides of entire island flanks, or calderas. Seven of the eight islands (all except La Gomera) can be considered volcanically active. The islands are true giants: Between one million and twenty million years old, they rise up to 3715 meters above the sea. By far the greater part, however, lies under water and locally even pushes in the ocean crust. Thus, the volcanoes of the Canary Islands often have a diameter of more than a hundred kilometers. Like the tip of an iceberg, La Palma also rises out of the sea. 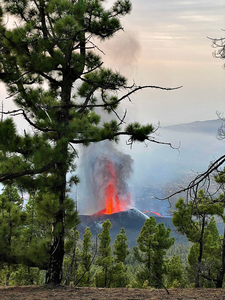 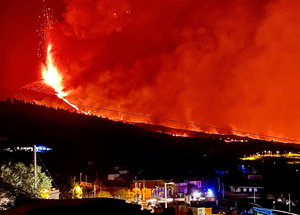 La Palma and the location of the Cumbre Vieja lava flow on 3 October 2021.