For half a century, human’s activities drastically altered the climate, environment, and ecosystem of the Earth, which restricted the sustainable development and affected the human well-being. Impervious surface areas (ISA), i.e., artificial structures with impermeable characteristics, mainly including roofs, paved surfaces, roads, and hardened grounds, are the most affected regions. Using more than three million Landsat satellite images, this research developed the first global impervious surface area (GISA) dataset from 1972 to 2019. Based on 120,777 independent and random reference sites from 270 cities all over the world, the omission error, commission error, and F-score of GISA are 5.16%, 0.82%, and 0.954, respectively.

Compared to the existing global datasets, the merits of GISA include: 1) it provided the global ISA maps before the year of 1985, and showed the longest time span (1972–2019), and the highest accuracy (in terms of a large number of randomly selected and third-party validation sample sets); 2) it presented a new global ISA mapping method, including a semi-automatic global sample collection, a locally adaptive classification strategy, and a spatio-temporal post-processing procedure; and 3) it extracted ISA from the whole global land area (not from an urban mask) and hence reduced the underestimation.

Moreover, on the basis of GISA, the long time series global urban expansion pattern (GUEP) has been calculated for the first time, and the pattern of continents and representative countries were analyzed. The two new datasets (GISA and GUEP) produced in this study can contribute to further understanding on the human’s utilization and reformation to nature during the past half century, and can be freely download from: http://irsip.whu.edu.cn/resources/dataweb.php or

Since 1986, we calculated the proportion of urban expansion types of each continent for every two years (Figure 3). On a global scale, edge expansion is the primary pattern in the recent 30 years. Except for Oceania (with non-significant increase) and North America (with fluctuations after 2008), the proportions of edge expansion in most continents show linear growth, indicating that urban sprawl (i.e., edge expansion) is widespread and accelerating. On the whole, the proportion of edge-expansion in North America is highest, possibly owing to the low density urban sprawl happened in this region. From the temporal perspective, Africa and Asia not only have the fastest urbanization speed in recent decades, but are the major areas with accelerated urban sprawl. 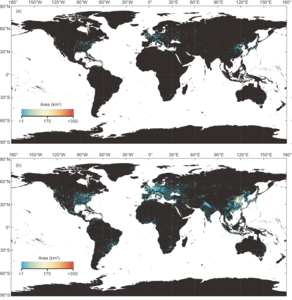 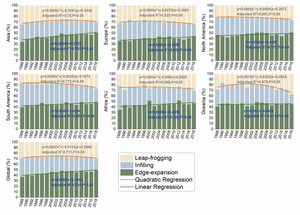