With warming climate, summer sea ice in the Arctic has been shrinking fast, and now consistently spans less than half the area it did in the early 1980s. This raises the question: If this keeps up, in the future will year-round sea ice—and the creatures who need it to survive—persist anywhere?

A new study addresses this question, and the results are daunting. The study targets a 1 million-square kilometer region north of Greenland and the coasts of the Canadian Archipelago, where year-round sea ice has traditionally been thickest, and thus likely to be most resilient. It says that under both optimistic and pessimistic scenarios, by 2050 summer ice in this region will dramatically thin. Under the optimistic scenario, if carbon emissions can be brought to heel by then, some summer ice could persist indefinitely. However, under the pessimistic scenario, in which emissions continue on their current path, summer ice would disappear by 2100, along with creatures such as seals and polar bears. The study appears in the journal Earth’s Future.

“Unfortunately, this is a massive experiment we’re doing,” said study coauthor Robert Newton, a senior research scientist at Columbia University’s Lamont-Doherty Earth Observatory. “If the year-round ice goes away, entire ice-dependent ecosystems will collapse, and something new will begin.”

Scientists have been pondering the fate of Arctic sea ice for decades. Around 2009, researchers including Newton’s coauthors Stephanie Pfirman and L. Bruno Tremblay first coalesced around the idea of what they have called the Last Ice Area—the region where summer ice will likely make a last stand.

In winter, most of the Arctic Ocean surface freezes, and probably will for the foreseeable future, even as climate warms. Ice can grow up to a meter thick each winter, and if it survives one or more summers, it can reach several meters. In summer, some melting usually occurs, and scattered open-water areas appear. This helps winds and currents carry floating ice great distances in various gyres, including the overarching Transpolar Drift, which carries ice clockwise from off Siberia toward Greenland and Canada.  Each year, some ice is expelled into the North Atlantic via straits between Greenland and Norway. But much of it gets driven against the Arctic’s farthest-north coasts, along Greenland and the Canadian islands. Here, repeated inflows of ice can build layers and pressure ridges as high as 10 meters. Much of it will remain for 10 years or more before eventually breaking off and moving back off.

The result is a rich marine ecosystem. Along the edges and bottoms of multiyear ice, photosynthetic diatoms bloom and build up thick mats over time. These feed tiny animals living in and near the ice, who feed fish, who feed seals, who feed polar bears. Among other things, the thick, irregular topography provides ample hiding places for seal lairs, and ice caves for polar bears to winter over and raise their young. It also provides safe haven from humans, who can barely navigate here, even with icebreakers.

Historically, most of the  ice that ends up in the Last Ice Area has come from the continental shelves off Siberia via the Transpolar drift. Siberian ice also mixes with ice formed in the central Arctic Ocean, which also may travel into the Last Ice Area. But the ocean is now forming progressively thinner ice, which is melting faster in summer’s increasingly open waters. As this trend progresses, the researchers say, this will starve the Last Ice Area in the next few decades. Some ice will continue to drift in from the central Arctic, and some will form locally, but neither will be enough to maintain current conditions.

By mid-century, under the researchers’ low-emissions scenario, even ice from the central Arctic will wane, and thick, multiyear ice will become a thing of the past; locally formed summer ice will persist in the Last Ice Area, but only a meter thick. The good news: at least some seals, bears and other creatures may survive, as they currently do under similar summer conditions along western Alaska and parts of Hudson Bay. The bad news: under the higher-emissions scenario, by 2100, even the locally formed ice will give up the ghost in summer. There will be no more summer ice anywhere, and no ice-dependent ecosystems.

“This is not to say it will be a barren, lifeless environment,” said Newton. “New things will emerge, but it may take some time for new creatures to invade.” Fish, diatoms or other biota may come up from the North Atlantic, but it is not clear if they could survive there year round; it may be getting warmer, but the planet’s rotation around the sun will not change, and any new occupants including photosynthetic organisms would have to deal with the long, sunless Arctic winter.

The researchers look on the bright side. Newton says that if the world can make enough progress toward curbing carbon in the atmosphere during the 21st century, the region could hang on long enough for temperatures to start going down again, and the Last Ice Area might start to regrow. One hopeful sign: in 2019 Canada established the 320,000-square kilometer Tuvaijuittuq Marine Protected Area in the Inuit territory of Nunavut, spanning the middle third of the Last Ice Area. This protects against mining, transport and other development for five years while Canada considers permanent protection. The rest of the region lies within Canada’s mining-friendly Northwest Territories, which so far has resisted declaring protection, and off Greenland, which has so far been noncommittal.

In any case, if the last ice area is to be preserved, say the researchers, it will require the formation of other marine protected areas across the Arctic. This, because the Arctic Ocean and its coasts are home to many billions of dollars in oil reserves and mineral deposits such as nickel and copper. As summer waters open up, there will be increasing pressure to dig, drill and open up transport corridors, and this might well export pollution, not ice, to the last ice area. Already the Russian oil company Rosneft has leases on some areas that traditionally have fed ice to the Last Ice Area.

“Spilled oil and industrial or agricultural contaminants have been identified as potential hazards,” the researchers write.

Coauthor Stephanie Pfirman, previously at Lamont-Doherty, is now at Arizona State University; L. Bruno Tremblay is at McGill University. The study’s other coauthor, Patricia DeRepentigny, is at the University of Colorado, Boulder.

Lamont-Doherty Earth Observatory is Columbia University’s home for earth science research. Its scientists develop fundamental knowledge about the origin, evolution and future of the natural world, from the planet’s deepest interior to the outer reaches of its atmosphere, on every continent and in every ocean, providing a rational basis for the difficult choices facing humanity. www.ldeo.columbia.edu  |  @LamontEarth

Arctic Ocean's 'last ice area' may not survive the century 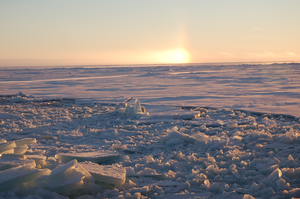 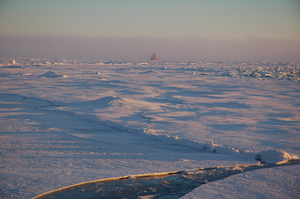