For 20 years, a team from the VUB research group Ice and Climate Research, led by Professor Philippe Huybrechts, has been travelling to the Alps at the end of the summer to measure the mass balance of the Morteratsch and Pers glaciers. The data collected is used to make glacier models and map climate change. Traditionally, this is done using stakes spread across the glacier, but in recent years the team has also used drones.

“This allows a much larger area to be monitored, in more detail, and makes the fieldwork safer,” said Lander Van Tricht, who studies glaciers in the Alps and in Asia for his PhD. “Having analysed last year’s data, we see that the Morteratsch and Pers glaciers have again lost a lot of mass, although the situation was slightly less negative than in previous years, due to the wet summer. Glaciers are losing mass faster and faster due to climate change, but one cooler summer will not change that. Due to climate change, less snow falls on the lower parts of the glacier and more snow and ice melts away. At the end of the summer, the balance is therefore negative and the glacier is out of balance and loses net mass. If that happens for years in a row, as we are seeing now, the glaciers retreat.”

At the end of each summer, the research team measures all the stakes that have been drilled into the ice across the glacier with a steam drill. In this way, they find out how much ice and snow has melted away at each position in one year. This data is then interpolated to get a picture of the situation for the glacier as a whole. The collected data is used in models to predict how the glacier will evolve based on different climate scenarios. For three years, the VUB team has also been working with the Swiss network Glamos, which monitors several glaciers.

Meanwhile, drones are also being used for the measurements. A drone can be used to fly over areas that are not accessible for direct measurements, such as steep ice cliffs, areas with many glacier crevasses or snow bridges.

Van Tricht: “In my research, I am now using a new method that we developed to use a drone to reconstruct a 3D model of a glacier and determine from that the mass balance, which is the difference between snowfall and melt.”

The researchers fly a drone about 200 metres above the ice to take overlapping photographs. Using algorithms, they can then determine the surface altitude, and because the altitude of the valley on which the glacier rests changes very little, they can compare how much snow and ice has melted over the course of each year.

Van Tricht: “To determine the mass balance, it was crucial to take the ice flow into account, which was the focus of our recent study. In it, I showed that with this new technique, we can obtain similar results to those obtained with the glacier stakes. Ultimately, I think it should be possible to obtain similar results from satellites, although the resolution will have to be increased.”

The research was published in The Cryosphere: Estimating surface mass balance patterns from unoccupied aerial vehicle measurements in the ablation area of the Morteratsch-Pers glacier complex (Switzerland) 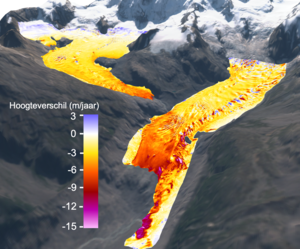 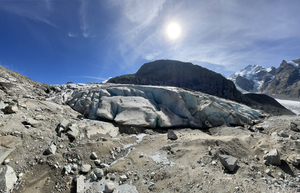