Portland, Ore., USA: For decades, mining companies unearthed uranium in the American Southwest. Today, the remnants of those mines pepper the landscape, especially in the Navajo Nation, in northeast Arizona. Mine tailings and dust still circulate through the ecological system, spreading radioactive particles on soils, waterways, and homes.

This radioactive dust is taken up by plants and spreads through the leaves and shoots. Grazing animals like sheep, a common livestock consumed by Navajo people, eat the contaminated plants and incorporate the radioactive materials into their tissues. Thus, uranium exposure is concentrated further through the food chain.

A new study presented at the Geological Society of America’s Connects 2021 annual meeting examines how chronic uranium exposure in the food chain might be reduced. Professor Laura Wasylenki, of Northern Arizona University, is presenting the work of her former graduate student Katherine Dunlap, where they examined how root fungi might alter the uptake of uranium in plants.

Plants absorb elements, including uranium, from the soil and spread the material from “root to shoot,” says Wasylenki. Animals that graze on the plants will then ingest uranium, where it accumulates in tissue. The Navajo community raises sheep, which are an important source of food and part of their cultural heritage. The uranium stored in the sheep move up the food web into humans.

Wasylenki says hardly anything is known about the role of fungi in the uptake of elements by plants. “We saw one experimental paper saying the fungi made the plants take up more uranium total, but only in the roots—it didn't transport up into the shoots or leaves of the plants.”

She explains that in grazers, some pull up the whole plant to munch on, while others (like sheep) pluck the tops of the plants. Wasylenki and Dunlap wanted to test whether there was a way to stimulate growth of the right fungi and sequester uranium underground. “Then at least you would be helping to reduce the uranium consumption of guys that just crop the tops [of the plants],” notes Wasylenki.

The team grew sunflowers with and without symbiotic root fungi (called arbuscular mycorrhizal fungi). In particular, they were curious how the mineralogy of the soil and the presence of fungi would influence the uptake of uranium in sunflowers. Artificial soil (Turface) with no uranium present was used in the pots, and a layer of clay-rich material was added. Uranium was added in a known concentration when the plants were watered.

When they looked at the uranium concentrations in plant tissues, they found that the presence of fungi decreased the spread of uranium from roots to shoots. They also found that the presence of a clay layer in the soil increased the uptake of uranium in the plants. Wasylenki hypothesizes that “uranium would sorb to the clay surfaces, holding it there, so that it had a longer residence time around the roots.” She adds that while more uranium was taken up in clay-rich soils, less was translocated throughout the plant—more was stored in the root system of the sunflowers.

Wasylenki notes that their sample size for the initial experiment was small but has plans to expand the testing with a larger sample size and various soil types. The team notes that this work is an important first step in understanding whether fungi can help mitigate uranium exposure for grazing animals, which ultimately make their way into the human food chain, especially for those in the Navajo community.

Eliminating uranium from the food chain: Are fungi the key? 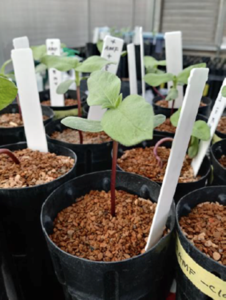 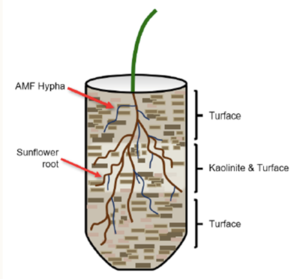 Cartoon drawing of the sunflower seedling