Juvenile green sea turtles (Chelonian mydas) living in nearshore waters often exhibit tumors that grow on their soft tissues and shells, symptoms of a disease called Green Turtle Fibropapillomatosis. While the disease has been linked to a virus called chelonid alpha-herpesvirus 5, the virus has co-existed within turtle populations for more than 300 million years, although the disease itself has become pandemic only in the last century. The virus can be found in clinically healthy turtles that don’t have any tumors, suggesting that expression of the disease is multi-factorial. Evidence from other studies shows that there is a link between environmental pollution and immune suppression in a variety of animals.

Researchers obtained blood samples from 87 green turtles captured and released from the Indian River Lagoon, a heavily polluted estuary with high levels of heavy metals, persistent organic pollutants and excessive nutrients, and the moAdre pristine, man-made Trident Basin, located near Cape Canaveral. They examined two branches of the immune system: the very specific adaptive immunity, which involves the recognition of antigens and the development of memory cells and is most often measured by how actively white blood cells respond to an immune challenge (lymphocyte proliferation); and innate immunity, which acts as an initial defense mechanism against pathogens and in part involves phagocytic white blood cells that gobble up foreign particles.

Results of the study, published in the Journal of Wildlife Diseases, showed that both adaptive and innate immune function were compromised in green sea turtles captured in the Indian River Lagoon, where historical rates of Green Turtle Fibropapillomatosis in that population are greater than 50 percent. Within the Indian River Lagoon, turtles that expressed tumors had less immune competence that those in that habitat without tumors. By comparison, turtles from the Trident Basin are free of Green Turtle Fibropapillomatosis, and both their innate and adaptive branches of immune function exhibited greater immune competence.

“Findings from our study suggest that habitat quality, disease state, and immune function are intertwined, forming a positive feedback loop wherein polluted environments impact the immune system and make animals more prone to the expression of Green Turtle Fibropapillomatosis, which in turn further compromises the immune system,” said Sarah L. Milton, Ph.D., lead author and chair and professor,  Department of Biological Sciences, Charles E. Schmidt College of Science. “Reduced immune competence may initially permit disease, and disease status in turn may then further hinder immune-competence. Such a vicious cycle could explain why certain locations have such a high incidence of disease, while other areas have turtles that test positive for chelonid alphaherpesvirus 5 but are clinically healthy.”

An earlier study by Milton of stress responses at the molecular level also suggested that green sea turtles in the Indian River Lagoon are physiologically stressed. Whether they had visible tumors or not, levels of cellular stress markers were higher in these animals than in the Trident Basin turtles.

The green seas turtles were sampled in 1999 and 2001 and from 2011 to 2013 across all seasons. As part of ongoing tag-recapture studies in the Indian River Lagoon and Trident Basin, this study was conducted under permit from Florida Fish and Wildlife Conservation Commission (permit No. FWC MTP186, permit No. FWC MTP053) and National Marine Fisheries Service (permit No. NMFS 14506). 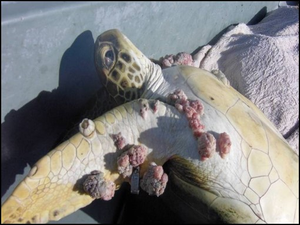 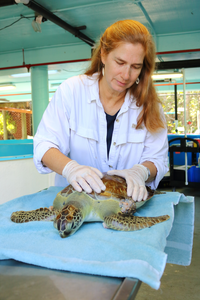