Direct evidence that microtubules function as mechano-sensors and regulate the intracellular transport of molecules has been reported, leading to new possibilities in the fields of biomechanics, medicine, and biosensors.

Inside cells, microtubules not only serve as a component of the cytoskeleton (cell skeleton) but also play a role in intracellular transport. In intracellular transport, microtubules act as rails for motor proteins such as kinesin and dynein. Microtubules, the most rigid cytoskeletal component, are constantly subjected to various mechanical stresses such as compression, tension, and bending during cellular activities. It has been hypothesized that microtubules also function as mechanosensors that convert mechanical information into biochemical information.

Recent studies have shown that mechanical stress has a significant effect on cell differentiation, development, and disease. Some studies have suggested that microtubules, which are the most rigid cytoskeleton and play an important role in cell morphogenesis and intracellular material transport, may also function as mechanosensors; however, no direct evidence has been obtained to support such a speculation.

The team carried out experiments with microtubules in a cell free system. They found that kinesin movement is slowed down when the microtubule is bent. Using high-speed atomic force microscopy, which allows for the observation of dynamic processes at the atomic level, they confirmed that this phenomenon occurs even without cavities or cracks in the microtubule structure, which were thought to be the main reason behind the slowing. Analysis of the kinesin binding affinity showed that bent microtubules appear stickier to kinesin compared to unbent microtubules. From all-atom molecular dynamics simulations, it was found that the mechanism of such slowing down involves the enhanced interaction energy of kinesin and deformed microtubule structural units.

The results of this research have implications in the fields of biomechanics and mechanobiology, that study the mechanical environment in and around cells; in research on neurological diseases caused by impeded axonal cargo transport; and for the development of mechanical sensors by biomolecular proteins. 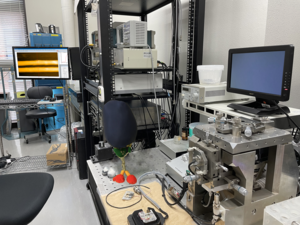 The high-speed atomic force microscope used in the study 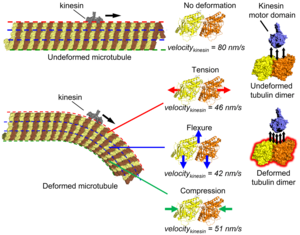 Contributors to the study