Portland, Ore., USA: Early in animal evolution, complex life was mostly limited to the sea floor. But a few organisms evolved to move through the water, giving them a big competitive advantage over those left scuttling around in the mud.

Anomalocaris canadensis, thought to be one of the first predator animals, is one of those early swimmers. But paleontologists are still working out how exactly it hunted. New research, which will be presented at the Geological Society of America’s Connects 2021 annual meeting on Wednesday, aims to define how exactly this animal used its long, spider-like front appendages to hunt.

With the mouth of a barnacle, the swimming style of a cuttlefish, the front legs of a spider, and the overall feel of a giant shrimp, the 50-centimeter A. canadensis is the poster child for the evolutionary test factory that was the Cambrian period (542 to 485 million years ago). The “weird shrimp,” which is a rough translation of the animal’s Latin name, is preserved in the Burgess Shale, a paleontological site known for exceptional preservation of soft-bodied organisms. The unique ancient environment provides scientists today with valuable insights into early animals like A. canadensis, whose soft body parts are difficult to preserve.

“As a complete animal, there really isn’t anything today that is moderately comparable. However, if we split it up into major components, we can find useful modern analogues,” said Russell Bicknell, an evolutionary paleontologist at the University of New England in Australia who is presenting the work.

In paleontology, there is a longstanding idea that A. canadensis could have been responsible for some of the scarred and crushed trilobite exoskeletons found during its time. But the animal was essentially soft-bodied, meaning it lacked the hard exoskeleton “armor” of some of its contemporaries (such as trilobites). That raises questions over if, and how, the “soft and squishy” A. canadensis could have hunted armored prey.

After reconstructing A. canadensis in 3D and micro-CT scanning two modern animals with relatively similar frontal appendages, whip spiders and whip scorpions, Bicknell and his colleagues used detailed, 3D modeling to stretch and contract A. canadensis’s front appendages, the “legs” thought to have been used for grabbing prey. They can do so by relying on the geometry of the segmented fossil parts.

“In the model, I move each segment sequentially, and I only stop when something is effectively impaling another part of the body. So we are using the shapes to effectively put limitations on its range of motion,” Bicknell said. Once the range of motion was established, they compared it to movements to modern scorpions and spiders with similar appendages.

“That comparison of maximum extension and minimum rolling to modern forms is how we were able to confidently demonstrate that these animals definitely used their appendages to grab things,” Bicknell said.

However, it’s not enough to simply establish a range of motion; there’s a question of strength, too. Now, Bicknell and his colleagues are virtually applying muscles to the 3D model to understand the limits of the appendages in grabbing. By using this biomechanical approach, they can test whether the limbs had the strength to crack and crush shells. The model results will help determine, after all these years, whether A. canadensis could have been a trilobite hunter.

For Bicknell, the whole effort is a deep dive into the weird, wonderful world of early animal life. “Anomalocaris epitomizes the Cambrian when life was like, ‘I’m going to stick things together and see what we get. Is this how we build a predator?’” he said. “It really showcases that life was in this highly dynamic place where evolution was effectively trying to produce animals to fill up all these ecological niches that had developed.”

Cracking the case of how one of the earliest predators hunted 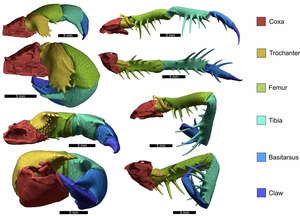