New York, NY—October  12, 2021—The interior of the Earth is a mystery, especially at greater depths (> 660 km). Researchers only have seismic tomographic images of this region and, to interpret them, they need to calculate seismic (acoustic) velocities in minerals at high pressures and temperatures. With those calculations, they can create 3D velocity maps and figure out the mineralogy and temperature of the observed regions. When a phase transition occurs in a mineral, such as a crystal structure change under pressure, scientists observe a velocity change, usually a sharp seismic velocity discontinuity.

In 2003, scientists observed in a lab a novel type of phase change in minerals--a spin change in iron in ferropericlase, the second most abundant component of the Earth’s lower mantle. A spin change, or spin crossover, can happen in minerals like ferropericlase under an external stimulus, such as pressure or temperature. Over the next few years, experimental and theoretical groups confirmed this phase change in both ferropericlase and bridgmanite, the most abundant phase of the lower mantle. But no one was quite sure why or where this was happening.

In 2006, Columbia Engineering Professor Renata Wentzcovitch published her first paper on ferropericlase, providing a theory for the spin crossover in this mineral. Her theory suggested it happened across a thousand kilometers in the lower mantle. Since then, Wentzcovitch, who is a professor in the applied physics and applied mathematics department, earth and environmental sciences, and Lamont-Doherty Earth Observatory at Columbia University, has published 13 papers with her group on this topic, investigating velocities in every possible situation of the spin crossover in ferropericlase and bridgmanite, and predicting properties of these minerals throughout this crossover. In 2014, Wenzcovitch, whose research focuses on computational quantum mechanical studies of materials at extreme conditions, in particular planetary materials predicted how this spin change phenomenon could be detected in seismic tomographic images, but seismologists still could not see it.

Working with a multidisciplinary team from Columbia Engineering, the University of Oslo, the Tokyo Institute of Technology, and Intel Co., Wenzcovitch’s latest paper details how they have now identified the ferropericlase spin crossover signal, a quantum phase transition deep within the Earth’s lower mantle. This was achieved by looking at specific regions in the Earth’s mantle where ferropericlase is expected to be abundant. The study was published October 8, 2021, in Nature Communications.

“This exciting finding, which confirms my earlier predictions, illustrates the importance of materials physicists and geophysicists working together to learn more about what’s going on deep within the Earth,” said Wentzcovitch.

Spin transition is commonly used in materials like those used for magnetic recording. If you stretch or compress just a few nanometer-thick layers of a magnetic material, you can change the layer's magnetic properties and improve the medium recording properties. Wentzcovitch’s new study shows that the same phenomenon happens across thousands of kilometers in the Earth’s interior, taking this from the nano- to the macro-scale.

“Moreover, geodynamic simulations have shown that the spin crossover invigorates convection in the Earth’s mantle and tectonic plate motion. So we think that this quantum phenomenon also increases the frequency of tectonic events such as earthquakes and volcanic eruptions,” Wentzcovitch notes.

There are still many regions of the mantle researchers do not understand and spin state change is critical to understanding velocities, phase stabilities, etc. Wentzcovitch is continuing to interpret seismic tomographic maps using seismic velocities predicted by ab initio calculations based on density functional theory. She is also developing and applying more accurate materials simulation techniques to predicting seismic velocities and transport properties, particularly in regions rich in iron, molten, or at temperatures close to melting.

“What’s especially exciting is that our materials simulation methods are applicable to strongly correlated materials--multiferroic, ferroelectrics, and materials at high temperatures in general,” Wentzcovitch says. “We’ll be able to improve our analyses of 3D tomographic images of the Earth and learn more about how the crushing pressures of the Earth’s interior are indirectly affecting our lives above, on the Earth’s surface.”

The study is titled “Seismological expression of the iron spin crossover in ferropericlase in the Earth’s lower mantle.”

Columbia Engineering
Columbia Engineering, based in New York City, is one of the top engineering schools in the U.S. and one of the oldest in the nation. Also known as The Fu Foundation School of Engineering and Applied Science, the School expands knowledge and advances technology through the pioneering research of its more than 220 faculty, while educating undergraduate and graduate students in a collaborative environment to become leaders informed by a firm foundation in engineering. The School’s faculty are at the center of the University’s cross-disciplinary research, contributing to the Data Science Institute, Earth Institute, Zuckerman Mind Brain Behavior Institute, Precision Medicine Initiative, and the Columbia Nano Initiative. Guided by its strategic vision, “Columbia Engineering for Humanity,” the School aims to translate ideas into innovations that foster a sustainable, healthy, secure, connected, and creative humanity. 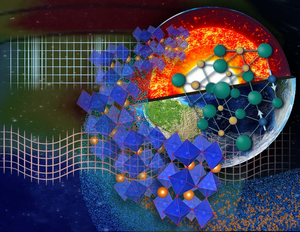