While hydrogen is widely suggested as an alternative fuel with zero carbon emission, the majority of commercial hydrogen fuel production is obtained from the refining of fossils fuels. The limited reservoir of fossils fuels and their negative impact on the environment has encouraged researchers to develop alternative technologies to produce hydrogen fuel through an eco-friendly process. Such “green hydrogen” can be produced from the electrolysis of water, which is abundant in nature, using electricity derived from a renewable energy source. However, the efficiency of water electrolysis is significantly limited due to the sluggish oxygen evolution reaction (OER), which requires a high thermodynamic voltage of 1.23 V.

To save energy for hydrogen generation, replacing sluggish water electrolysis with urea oxidation reaction (UOR) offers a great promise, due to thermodynamically favorable (0.37 V, thermodynamic voltage) conditions of urea electrolysis. There is an additional advantage of mitigating the issue of urea contamination, where around 2,200 billion tons of urea-rich wastewater are discharged into the river every year. Catalysts based on noble metals, such as platinum (Pt) and rhodium (Rh), are used to enhance the rate of the oxidation process. However, these noble metal catalysts are very expensive and show poor performance under long-term operation.

Recently, single-atom-catalysts (SACs) have shown exceptional performances compared to nanomaterials-based counterparts. However, the low metal loading (< 3 wt%) of SACs, which is caused by the tendency of the surface atoms to migrate, poses a serious challenge for a scalable application.

Led by Associate Director LEE Hyoyoung of the Center for Integrated Nanostructure Physics within the Institute for Basic Science (IBS) located at Sungkyunkwan University, the IBS research team developed a strategy to achieve ultra-high loading of single metal atom sites. This was accomplished by introducing surface strain on the support material, which allowed for exceptional urea oxidation assisted hydrogen fuel generation.

“We used liquid nitrogen quenching method to generate tensile strain on the surface of cobalt oxide (Co3O4). The ultra-high cooling rate expands the lattice parameter of the quenched sample because of thermal expansion, giving rise to tensile strain on the oxide surface. The strained surface of Co3O4 stabilized ~200% higher loading of rhodium single atom (RhSA; 6.6 wt% bulk loading and 11.6 wt% surface loading) sites compared to the pristine Co3O4 surface. We found that the strained surface can significantly increase the migration energy barrier of RhSA compared to the pristine surface, inhibiting their migration and agglomeration,” says the Ph.D. candidate, Ashwani Kumar, the first author of the study.

“We were very excited to discover that the high loading of RhSA stabilized on the strained Co3O4 surface demonstrated exceptional UOR activity and stability in both alkaline and acidic media, which was much superior to the commercial Pt/C and Rh/C. This surface strain strategy in the field of SACs has never been reported until our findings,” notes Associate Director Lee, the corresponding author of the study. The researchers also found that this strategy for the high-loading of single-atom sites was not only limited to rhodium. Ultra-high loading of other noble metals such as platinum, iridium, and ruthenium-based single-atom sites was also stabilized using the strained surface strategy, which provides ground for more general application of this discovery.

The research team evaluated the catalytic efficiency and the working voltage needed for urea oxidation using this new catalyst. The advanced catalyst (RhSA on strained Co3O4) required only 1.28 V vs. reversible hydrogen electrode (RHE) to attain a current density of 10 mA (milliampere) per cm2 of the electrode, which was lower than that of the commercial Pt and Rh catalysts’ requirements of 1.34 and 1.45 V, respectively. In addition, the catalyst also showed long-term stability for 100 hours without any change of structure. The group used density functional theory simulation to explore the origin of the new catalyst’s extraordinary performance, which was revealed to be due to superior urea adsorption and stabilization of CO*/NH* intermediates. Furthermore, the electrolysis of urea saved ~16.1% more energy compared to water electrolysis for hydrogen generation.

Associate Director Lee explains, “This study provides a general strategy for stabilizing high-loading of single-atom sites for scalable applications, which was a long-standing problem in the filed of SACs. In addition, this study takes us a step closer to a carbon-free and energy-saving hydrogen economy. This highly efficient urea oxidation electro-catalyst will help us overcome long-term challenges of the fossil fuel refining process: to produce high-purity hydrogen for commercial applications at a low price and in an eco-friendly manner.”

The study was published online on September 30th in “Energy & Environmental Science (IF 38.53)” a world-renowned journal in the field of environment and energy. 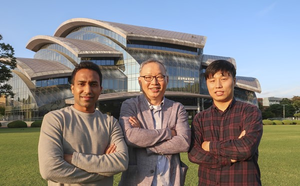