Known by expectant parents as the technology that enables them to see their child for the first time, ultrasound can be used at extremely low frequencies to serve an entirely different purpose. Researchers at KTH Royal Institute of Technology report the first time ultrasound to extract valuable metals from electric car NMC batteries—a key contribution to the battery recycling process.

Not only does the new method add ultrasonic waves to the process of extracting metal ions from destroyed batteries, it also offers an alternative to the current use of harmful leaching agents—such as sulfuric acid. The payoff is a 50 percent reduction in extraction time and an increased recovery of metal ions such as lithium, cobalt, manganese, and nickel, says Xiong Xiao, a researcher in polymeric materials at KTH.

“A cornerstone of a future sustainable battery market will be resource-efficient metals recycling, allowing for a continuous supply of raw materials,” Xiao says. “The benefits will extend beyond electrification of automobiles to countless systems that rely on sustainable energy storage—from mobile phones to electrical grids.”

Ultrasonic baths send waves of mechanical pressure with extremely high frequencies. In this case, the researchers used a frequency of 40kHz—a tone far beyond the hearing range of humans. These waves create microbubbles that collapse, generating local temperatures of nearly 5,000C, and producing highly reactive free radicals. The resulting agitation increases the transfer of mass in battery metals to an extent that harsh chemicals are no longer necessary for metal extraction.

Instead, gentler, environmentally safe acids such as citric and acetic acid can be used, Xiao says.

As reported in the journal Green Chemistry, the method achieved on average 97 percent metal ion recovery, which was a substantially higher amount of recovered metal ions than for the same conditions when only mechanical stirring was used. The highest recoveries were achieved for cobalt and nickel, reaching more than 99 percent, while lithium and manganese were recovered with 94 to 96 percent efficiency.

“With ultrasound Xiong Xiao has discovered a way to eliminate the need for chemicals normally used, such as strong acids that are nearly unmanageable,” says Richard Olsson, co-author and lecturer at the Division of Polymeric materials at KTH.

Olsson says that next step is to optimize the ultrasound even further, for example, using different levels of intensity and frequency in order to reach even faster extraction of the valuable battery metals.

Xiao’s work is a part of PERLI (Process for Efficient Recycling of Lithium Ion Batteries) project 48228-1 financed by The Swedish Energy Agency. The research was carried out in collaboration with battery manufacturer Northvolt.

There are no conflicts to declare. 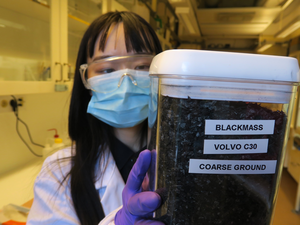 From dust back to batteries 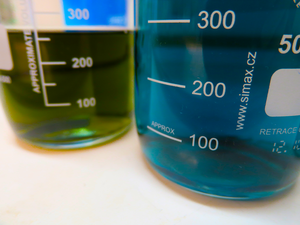