It’s like a half-hearted dress up party: gobies don’t camouflage completely in groups, new research finds. They change colour to avoid detection by predators and do so faster and better when alone.

In the research, published in Royal Society Open Science, University of Sydney academics suggest this is because lone fish are more vulnerable. They add that camouflage has a metabolic cost, so gobies likely preserve this energy when, due to safety in numbers, they don’t need it as much.

“Grouping behaviour can reduce stress in fish, partly because they are in less danger of attack by predators. This 'safety in numbers' effect may allow them to change colour more slowly without added risk,” lead researcher Miss Stella Encel said.

“Since stress hormones like cortisol and adrenaline are central to the neurological mechanisms of colour change in fish, it’s possible that stress levels also directly affect their ability to camouflage.”

The presence of other individuals having a calming effect is known as ‘social buffering’. It has wide-reaching physiological and psychological benefits for many species, including humans. For example, people with rich and supportive social networks have been found to live longer and enjoy a lower risk of cardiovascular disease than their lonelier counterparts. Meanwhile, rats exposed to new environments are less fearful when accompanied by a friend.

Miss Encel, a PhD candidate in the School of Life & Environmental Sciences, and her supervisor, Professor Ashley Ward, visited Narrabeen Lagoon, Sydney from August last year. There, gobies are subject to predation by many larger fish and wading birds, which means they have a great need for camouflage.

They collected gobies from mud, sand, and gravel flats in shallow areas and then, in a lab, tested the gobies – alone and in pairs – against black and white backgrounds (which they had previously acclimated the fish to). Over time, they used Adobe Photoshop to measure the RGB values (a mathematical model for colour) of each fish and the background against which it was tested.

After statistically analysing the results, they found that changes in body colour plateaued within about three minutes. However, when the fish were alone, they were able to match their background much more closely and did so more quickly than in pairs.

Miss Encel said: “Very few studies have examined the role of social context in influencing colour change in camouflaging animals, and these have often been done without the benefit of modern colour analysis techniques. So, not only does our study build knowledge of goby behaviour; it could inform research on the thousands of other camouflaging animals.”

Goby is a general term to describe thousands of species of small to medium bottom-dwelling fish from the family Gobiidae, the largest family of fish.

Gobies are spread all over the world in tropical and temperate near shore-marine, brackish, and freshwater environments.

They are widespread: on coral reefs, for example, they constitute 35 percent of the total number of fishes. In Australia, they are found in coastal waters from southern Queensland to Victoria.

They grow to a maximum size of 3.5cm in length and generally choose to dwell on darker surfaces that enhance their camouflage abilities. 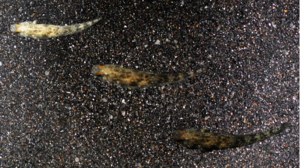