WASHINGTON—A new study documents the formation of a 3,000-square-kilometer rift in the oldest and thickest Arctic ice. The area of open water, called a polynya, is the first to be identified in an area north of Ellesmere Island, Canada’s northernmost island, and is another sign of the rapid changes taking place in the Arctic, according to researchers.

In May 2020, a hole a little smaller than the state of Rhode Island opened up for two weeks in the Last Ice Area, a million-square-kilometer patch of sea ice north of Greenland and Ellesmere Island that’s expected to be the last refuge of ice in a rapidly warming Arctic.

The polynya is the first one that has been identified in this part of the Last Ice Area, according to a new study detailing the findings in the AGU journal Geophysical Research Letters, which publishes high-impact, short-format reports with immediate implications spanning all Earth and space sciences.

The formation of the polynya was unusual because of its location, off the coast of Ellesmere Island, where the ice is up to five meters thick.

“No one had seen a polynya in this area before. North of Ellesmere Island it's hard to move the ice around or melt it just because it's thick, and there's quite a bit of it. So, we generally haven't seen polynyas form in that region before,” said Kent Moore, an Arctic researcher at the University of Toronto-Mississauga who was lead author on the study.

The surprise polynya formed during extreme wind conditions in a lingering anti-cyclone, or a high-pressure storm with high winds that rotate clockwise, Moore found. He combed through decades of sea-ice imagery and atmospheric data and found that polynyas formed there at least twice before, under similar conditions in 2004 and 1988, but no one had noticed.

Extreme wind conditions created the gap by pushing ice aside, which is common, said David Babb, a sea ice researcher at the University of Manitoba who was not involved in the study. But it’s unusual for sea ice as thick as in the Last Ice Area to be blown around, especially far from the coast where winds tend to be weaker than near the coast, he said.

The new study shows the region may not be as resilient to climate change as previously thought.

“The formation of a polynya in the area is really interesting. It's sort of like a crack in the shield of this solid ice cover that typically exists in that area. So that this is happening is also really, really highlighting how the Arctic is changing,” said Babb.

With Arctic ice getting thinner every year, polynyas could form more frequently, setting off a feedback loop of ice loss.

“The thing about thinning ice is that it's easier to move it around. As the ice gets thinner, it's easier to create these polynyas with less extreme forcing, so there is some evidence that these polynyas may become more common, or become larger, than they were in the past,” Moore said.  And warmer temperatures mean that lost ice is not likely to be replaced.

Polynyas form primarily through two ways: The ice is either blown out of the region or melts, forming the hole. They tend to form in the same locations year after year and typically grow near the coast, where the landscape can channel winds along the shore, blowing steadily in the same spot.

Polynyas are not necessarily bad for their local ecosystem on short timescales. Snow-covered ice doesn’t let much light into the water beneath it, limiting how much photosynthesis can occur, and that slows productivity further up the food chain. When the ice parts, the ecosystem perks up.

“When sea ice is around, it’s kind of like a desert. But when you get an area of open water, suddenly, all kinds of activity can occur. Seabirds go there to feed, as do polar bears and seals. They’re incredibly productive regions,” said Moore. That food-web boost historically filtered up to local Inuit populations who hunted in polynyas, according to Babb.

But the short-term boost for the local ecosystem doesn’t outweigh the long-term, and irreversible, damage of sea-ice loss.

“There’s a transient time where if we start to lose ice, there might be a net gain because it’d be more productive. But over the long term, as ice melts and moves offshore and species like walruses and seabirds, lose access to it, we lose that benefit. And eventually, it gets so warm that species can’t survive,” Moore said.

Notes for Journalists:
This research study will be freely available for 30 days. Download a PDF copy of the paper here. Neither the paper nor this press release is under embargo. 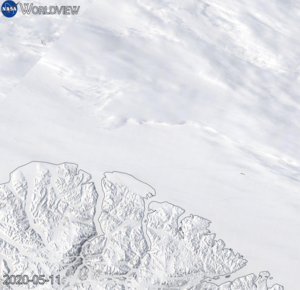