An international team of researchers, including scholars from the University of Bologna and the Italian National Astrophysics Institute (INAF), observed for the first time the evolution of warm gas coming from an active black hole. They were able to look at these structures, strongly reminiscent of the smoke streams produced by volcanic eruptions, with unprecedented detail and on a time scale of a hundred million years.

Their study, published in Nature Astronomy, focused on the Nest200047 system - a group of roughly 20 galaxies approximately 200 million light-years away. The central galaxy of this system houses an active black hole around which researchers observed many pairs of gas bubbles diverse in age, some unknown filaments of magnetic fields and relativistic particles in special relativity as big as hundreds of thousands of light-years.

These observations were possible thanks to LOFAR (LOw Frequency ARray), the largest low-frequency radio telescope in the world. LOFAR can intercept radiation produced by the oldest electrons that are currently detectable. This state-of-the-art tool stems from the great effort of nine European countries and allowed researchers to "go back in time" to more than 100 million years ago and retrace the activity of the black hole sitting at the centre of Nest200047.

"Our investigation shows how these gas bubbles accelerated by the black hole are expanding and transforming in time. Indeed, they create spectacular mushroom-shaped structures, rings and filaments that are similar to those originating from a powerful volcanic eruption on planet Earth", states Marisa Brienza who is the first author of this study and a researcher at the Department of Physics and Astronomy "Augusto Righi" of the University of Bologna and a member of INAF.

BUBBLES MADE OF PARTICLES
At the core of each galaxy sits a supermassive black hole. The activity of such a black hole crucially impacts the evolution of the galaxy and the intergalactic environment hosting it. For years researchers have been trying to figure out how and at what rate the action of these black holes produces those effects.

When active, black holes consume whatever surrounds them and, in that process, they release enormous quantities of energy. Sometimes this energy comes in the form of particle streams moving at close to the speed of light and producing radio waves. In turn, these streams generate bubbles of particles and magnetic fields that, by a process of expansion, can heat and move the intergalactic medium surrounding them. This has an immense influence on the evolution of the intergalactic medium itself and, as a consequence, on star formation rates.

This study proposes that active black holes have effects on scales that are up to 100 times bigger than the hosting galaxy and that that impact lasts up to hundreds of millions of years.

"LOFAR gave us a unique view of the activity of black holes and their effects on their surrounding environment", explains Annalisa Bonafede, one of the authors of the study and a professor at the University of Bologna as well as INAF member. "Our observations of Nest200047 crucially show how magnetic fields and the very old particles accelerated by black holes and consequently aged play a central role in transferring energy to the outer regions of groups of galaxies".

For this study, researchers also exploited observations in the X-ray band obtained using the eROSITA telescope on board the SRG space observatory. X-ray data allowed researchers to better study the characteristics of the intergalactic medium surrounding the radio-emitting gas bubbles.

GAS FILAMENTS
These observations brought about other unexpected discoveries: thin gas filaments as long as a million light-years made of particles moving at approximately the speed of light and magnetic fields.

According to the researchers, these filaments are the remnants of the bubbles that the Nest200047 black hole produced hundreds of millions of years ago and that are now shattering and mixing with the intergalactic medium. It is believed that studying these structures will lead to discovering new and important information about the physical features of the intergalactic matter and the physical mechanism regulating the energy transfer between the bubbles and the outer environment.

"In the future, we will be able to study the effects of black holes on galaxies and the intergalactic medium with increasing detail. Eventually, we will be able to unveil the nature of the filaments we discovered thanks to the angular resolution of LOFAR combined with the data from international LOFAR stations", adds Gianfranco Brunetti, co-author of this study as well as an astrophysicist at the INAF Bologna and Italian coordinator of the LOFAR consortium.

TELESCOPES
LOFAR is managed by ASTRON, the Netherland Institute for Radio Astronomy, and is composed of thousands of antennas hosted by 51 radio stations scattered over different European countries. LOFAR can intercept the lowest frequencies of radio waves on Earth (between 10 and 240 mega-Hertz). The National Astrophysics Institute (INAF) is the head of the Italian team of LOFAR and contributes to the development of a new generation of electronic devices for the telescope and of the software regulating its functioning.

The SRG spacecraft was designed by the Lavochkin Association, as part of the Roskosmos corporation and launched on July 13, 2019 with a Proton launcher from the Baikonur cosmodrome. The SRG observatory was built with the participation of the German Aerospace Center (DLR) in the framework of the Russian Federal Space Program by the initiative of the Russian Academy of Sciences represented by its Space Research Institute (IKI). The eROSITA telescope was built under the leadership of the Max-Planck-Institute for Extraterrestrial Physics (MPE) and DLR. The SRG spacecraft is operated by the Lavochkin Association and Deep Space Network Antennae in Bear Lakes, Ussurijsk, and Baykonur funded by Roskosmos.

In particular, among those took part in this study are Marisa Brienza and Annalisa Bonafede, from the University of Bologna (Department of Physics and Astronomy "Augusto Righi") and affiliated with INAF, working within the framework of the European Project DRANOEL - Deciphering RAdio NOn-thermal Emission on the Largest scales (ERC Starting Grant N. 714245). Among the authors are also Francesco de Gasperin, Gianfranco Brunetti, Alessandro Capetti and Fabio Gastaldello, who are affiliated with INAF.

A snapshot of the oldest AGN feedback phases 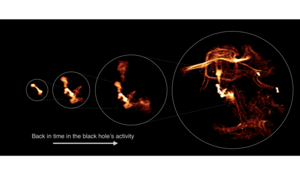 Back in time in the black hole's activity 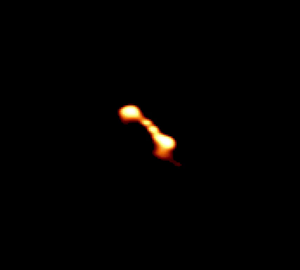 Back in time in the black hole's activity (animation)