The variety of humble algae that cover the surface of ponds and seas could hold the key to boosting the efficiency of artificial photosynthesis, allowing scientists to produce more energy and lower waste in the process.

A study by Nanyang Technological University, Singapore (NTU Singapore) scientists showed how encasing algae protein in liquid droplets can dramatically enhance the algae’s light-harvesting and energy-conversion properties by up to three times. This energy is produced as the algae undergoes photosynthesis, which is the process used by plants, algae and certain bacteria to harness energy from sunlight and turn it into chemical energy.

The study, led by Assistant Professor Chen Yu-Cheng from the School of Electrical and Electronic Engineering, looked at a particular type of protein found in red algae. These proteins, called phycobiliproteins, are responsible for absorbing light within algae cells to kick-start photosynthesis.

Phycobiliproteins harvest light energy from across the spectral range of light wavelengths, including those which chlorophylls absorb poorly, and convert it to electricity.

Asst Prof Chen said: “Due to their unique light-emitting and photosynthetic properties, phycobiliproteins have promising potential applications in biotechnology and solid-state devices. Boosting the energy from the light-harvesting apparatus has been at the centre of development efforts for organic devices that use light as a power source.”

The team’s research may lead towards a new, sustainable way of generating electricity from sunlight that does not rely on fossil fuels or natural gas, which are non-renewable. New bio-inspired technology based on phycobiliproteins could be used to make more efficient solar cells and paves the way for greater efficiency within artificial photosynthesis.

Using algae as a source of biological energy is a popular topic of interest in sustainability and renewable energy, as algae usage potentially reduces the amount of toxic by-products created in the manufacturing of solar panels.

The study supports NTU’s commitment to sustainability as part of its 2025 strategic plan, which seeks to understand, articulate, and address humanity’s impact on the environment.

The findings were published and selected as the cover of scientific journal ACS Applied Materials Interfaces.

Microalgae absorb sunlight and convert it into energy. In order to amplify the amount of energy that algae can generate, the research team developed a method to encase red algae within small liquid crystal micro-droplets that are 20 to 40 microns in size and exposed them to light.

When light hits the droplet, an effect known as the “whispering-gallery mode” occurs, in which light waves travel around the curved edges of the droplet. Light is effectively trapped within the droplet for a longer period of time, providing more opportunities for photosynthesis to take place and hence generating more energy.

The energy generated during photosynthesis in the form of free electrons can then be captured through electrodes as an electrical current.

“The droplet behaves like a resonator that confines a lot of light,” said Asst Prof Chen. “This gives the algae more exposure to light, increasing the rate of photosynthesis. A similar result can be obtained by coating the outside of the droplet with the algae protein too.”

“By exploiting microdroplets as a carrier for light-harvesting biomaterials, the strong local electric field enhancement and photon confinement inside the droplet resulted in significantly higher electricity generation,” he said.

The droplets can be easily produced in bulk at low cost, making the research team’s method widely applicable.

According to Asst Prof Chen, most algae-based solar cells produce an electrical power of 20-30 microwatts per square centimetre (µW/cm2). The NTU algae-droplet combination boosted this level of energy generation by at least two to three times, compared to the energy generation rate of the algae protein alone.

Artificial photosynthesis aims to replicate the natural biological process by which plants convert sunlight into chemical energy. The goal is to establish a way of making energy renewable, reliable, and storable without impacting the environment in a negative way.

Asst Prof Chen said: “Artificial photosynthesis is not as efficient as solar cells in generating electricity. However, it is more renewable and sustainable. Due to increasing interest in environmentally-friendly and renewable technologies, extracting energy from light-harvesting proteins in algae has attracted substantial interest in the field of bio-energy.”

Asst Prof Chen envisions one potential use case of “algae farms”, where densely-growing algae in bodies of water could eventually be combined with larger liquid crystal droplets to create floating power generators.

“The micro-droplets used in our experiments has the potential to be scaled up to larger droplets which can then be applied to algae outside of a laboratory environment to create energy. While some might consider algae growth to be unsightly, they play a very important role in the environment. Our findings show that there is a way to convert what some might view as ‘bio-trash’ into bio-power,” said Asst Prof Chen. 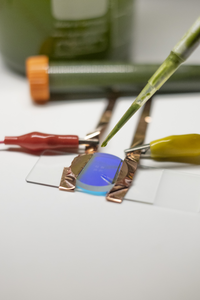 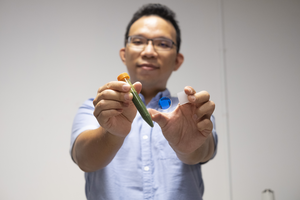