Ny-Ålesund/ Leipzig. Researchers from the Leibniz Institute for Tropospheric Research (TROPOS) and Leipzig University are currently using a tethered balloon to study the air layers near the ground in the Arctic, which play a major role in climate change in this region. The measurements should help to better understand the particularly strong warming of the Arctic and to map it more precisely in climate models. After the balloon system already proved itself in the summer on the international MOSAiC expedition, it is now being used for the first time in the Arctic autumn at the AWIPEV polar research station in Ny-Ålesund on Spitsbergen. The balloon measurements are part of the aircraft campaign HALO-(AC)³, which an international team of researchers will carry out in March/April 2022 to observe the transport of warm air into the Arctic and its effects in detail. For the first time, the German research aircraft HALO, Polar 5 and Polar 6 will fly together with the balloon in the Arctic and study the atmosphere in parallel at different altitudes.

The current measurements on Spitsbergen are mainly dedicated to the lowest air layers up to about 1000 metres altitude: “The cloudy Arctic boundary layer is characterised by a complex vertical stratification, which often decouples from the surface. Clouds strongly influence the exchange of heat between the ground and higher air layers and cause considerable effects on the energy balance,” explains Dr Holger Siebert from TROPOS, who is leading the balloon campaign. Current models often cannot describe these complex processes through the clouds realistically enough. Therefore, the researchers now want to make detailed measurements of these boundary layer processes in different seasons. Newly developed platforms for recording turbulence, radiation, cloud and aerosol parameters will be used to collect high-resolution profile data in the cloud-free and cloudy boundary layer. In addition, particle and cloud water samples will be taken, which will be analysed for marine carbohydrates, their transformation by atmospheric processes and their connection with ice freezing behaviour in cloud droplets in the laboratories in Leipzig after the campaign.
Of particular interest are the large seasonal differences, e.g. in the formation of new particles and in the interactions between clouds and aerosol particles. The balloon measurements are therefore taking place in two phases: the first part, which has now been launched, will investigate conditions in autumn during the transition to the polar night from late September to mid-November 2021. The second part will take a close look at the transition to the melting period in the Arctic spring from mid-March to mid-May 2022.
The fact that the measurement campaign is divided into two parts not only offers opportunities for new insights for the study of clouds and their energy balance; atmospheric chemistry also hopes to gain new insights into the feedbacks between biological activity and climate: “We are interested in the interactions between the ocean and the atmosphere – especially in the polar regions, which are strongly affected by climate change. During a 2019 measurement campaign in Antarctica, we saw circumstantial evidence that sugars are transported from the ocean into the atmosphere, but then change chemically quite quickly in the atmosphere. This points to bacteria in the air that then eat up the sugars in the atmosphere. We now want to get to the bottom of this on Spitsbergen by measuring the sugars in aerosols, cloud water and surface film and also cultivating the bacteria,” reports Sebastian Zeppenfeld from TROPOS.
In July 2020, the 12-metre-long and 90-cubic-metre helium balloon was already used in the MOSAiC expedition, in which the German research icebreaker Polarstern of the Alfred Wegener Institute drifted through the central Arctic for a year. During this time, the atmospheric team was able to measure the lowest layer of air above the melting ice floe. In a short time window, 33 balloon ascents were made, during which a total of 31,725 metres of rope were rolled up and down. The balloon measurements by TROPOS and Leipzig University were particularly important for understanding the polar atmosphere during the melting phase.
The second part of the balloon measurements on Spitsbergen will take place in parallel with the HALO-(AC)³ aircraft campaign in spring 2022, which will see the HALO, Polar 5 and Polar 6 research aircraft deployed together for the first time: the two polar aircraft Polar 5 and 6 from the Alfred Wegener Institute, the Helmholtz Centre for Polar and Marine Research (AWI), will be stationed in Longyearbyen on Spitsbergen (Norway). The HALO research aircraft from the German Aerospace Center (DLR) will operate from Kiruna (northern Sweden). The parallel balloon measurements will then serve primarily to establish a link between the long-term measurements stationed on the ground at the international AWIPEV base in Ny-Ålesund and the aircraft measurements collected from an altitude of about 300 m. “With the aircraft, we simply cannot fly as low and as slow as we like, and certainly not in the narrow fjord off Ny-Ålesund. Our balloon measurements have to cover this altitude range, which is extremely important in the Arctic for all exchange processes between the ground and the Arctic atmosphere,” adds Dr André Ehrlich from Leipzig University, who is involved in both the balloon and aircraft campaigns.
The balloon measurements and the planned HALO-(AC)³ campaign are led by the DFG Transregio “Arctic Climate Warming” (“ArctiCAmplification: Climate Relevant Atmospheric and SurfaCe Processes, and Feedback Mechanisms (AC)³”), in which researchers from Leipzig, Cologne, Bremen and Bremerhaven have been investigating since 2016 what role, for example, clouds, aerosol and exchange processes play in climate change in the Arctic and why the region around the North Pole is warming more than twice as fast as the rest of the world. The campaign is funded by two major projects of the German Research Foundation (DFG-TR 172 and DFG-SPP 1294) and the Alfred Wegener Institute Helmholtz Centre for Polar and Marine Research (AWI). Tilo Arnhold 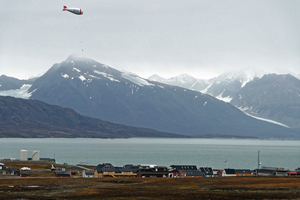