Fossils trapped in amber provide a unique snapshot of the anatomy, biology, and ecology of extinct organisms. The most common fossils found in amber, which is formed from resin exuded from tree bark, are land-dwelling animals, mainly insects. But on very rare occasions scientists discover amber housing an aquatic organism.

In a study published October 20 in Science Advances an international team of researchers describe the first crab from the Cretaceous dinosaur era preserved in amber. The study used micro CT to examine and describe Cretapsara athanata, the oldest modern-looking crab (approximately 100 million years old) and the most complete fossil crab ever discovered. It is rivalled in completeness by the mysterious Callichimaera perplexa, a very distant relative nicknamed the platypus of the crab world. Callichimaera’s stunning preservation included soft tissues and delicate parts that rarely fossilize. Both Cretapsara and Callichimaera are new branches in the crab tree of life that lived during the Cretaceous Crab Revolution, a period when crabs diversified worldwide and the first modern groups originated while many others disappeared.

True crabs, or Brachyura, are an iconic group of crustaceans whose remarkable diversity of forms, species richness, and economic importance have inspired celebrations and festivals worldwide. They’ve even earned a special role in the pantheon of social media. True crabs are found all around the world, from the depths of the oceans, to coral reefs, beaches, rivers, caves, and even in trees as true crabs are among the few animal groups that have conquered land and freshwater multiple times.

The crab fossil record extends back into the early Jurassic, more than 200 million years ago. Unfortunately, fossils of nonmarine crabs are sparse and largely restricted to bits and pieces of the animals carapace – claws and legs found in sedimentary rocks. That is until now with the discovery of Cretapsara athanata. “The specimen is spectacular, it is one of a kind. It’s absolutely complete and is not missing a single hair on the body, which is remarkable,” said lead author Javier Luque, postdoctoral researcher in the Department of Organismic and Evolutionary Biology, Harvard University.

A group of scientists led by co-lead author Lida Xing, China University of Geosciences, Beijing, made micro CT scans of the fossil, which is housed in the Longyin Amber Museum in Yunnan, China. The scans created a full three-dimensional reconstruction of the exquisite preservation of the animal allowing Luque, Xing, and their team to see the complete body of the animal including delicate tissues, like the antennae and mouthparts lined with fine hairs. Shockingly they discovered the animal also had gills.

“The more we studied the fossil, the more we realized that this animal was very special in many ways,” said Luque. Cretapsara is remarkably modern-looking – superficially resembling some shore crabs found today – unlike most crabs during the mid-Cretaceous era which looked quite different from modern crabs. Yet, the animal was entombed in Cretaceous amber and the presence of well-developed gills indicated an aquatic to semi-aquatic animal. Aquatic animals are rarely preserved in tree resins that become amber. Crabs previously found in amber are by the handful and belong to a living group of tropical land and tree-dwelling crabs known as Sesarmidae from the Miocene (15 million years ago). How then, the researchers asked, did a 100 million year old aquatic animal become preserved in tree amber, which normally houses land-dwelling specimens?

Gills allow aquatic animals to breathe in water. But crabs have successfully and independently conquered land, brackish water, and fresh water at least twelve times since the dinosaur era. In doing so their gills evolved to include lung-like tissue allowing them to breathe both in and out of the water. Cretapsara however, had no lung tissue, only well-developed gills indicating the animal was not completely land dwelling. “Now we were dealing with an animal that is likely not marine, but also not fully terrestrial,” Luque said. “In the fossil record, nonmarine crabs evolved 50 million years ago, but this animal is twice that age.”

The team’s phylogenetic studies show that carcinization (the evolution of true crab-looking forms) had actually already occurred in the most recent common ancestor shared by all modern crabs more than 100 million years ago. Cretapsara bridges the gap in the fossil record and confirms that crabs actually invaded land and fresh water during the dinosaur era, not during the mammal era, pushing the evolution of nonmarine crabs much further back in time.

The researchers hypothesize that Cretapsara, measuring at five millimeters in leg span, was a juvenile crab of a freshwater to amphibious species. Or, that the animal is perhaps a semi-terrestrial juvenile crab migrating onto land from water as occurs to the iconic Christmas Island red crabs where land dwelling mother crabs release their babies into the ocean, which later swarm out of the water back onto land. They further hypothesize that like the crabs found in amber from the Miocene, Cretapsara could have been a tree climber. “These Miocene crabs are truly modern looking crabs and, as their extant relatives, they live in trees in little ponds of water,” said Luque, “these arboreal crabs can get trapped in tree resin today, but would it explain why Cretapsara is preserved in amber?”

Luque’s research is centered on understanding why things evolve into crabs, and their evolution and diversification over time leading to the modern forms seen today. “This study is pushing the timing of origin of many of these groups back in time. Every fossil we discover challenges our preconceptions about the time and place of origin of several organisms, often making us look further back in time,” Luque said.

The study is part of a National Science Foundation funded project with Luque, Professor Javier Ortega-Hernández and postdoctoral researcher Joanna Wolfe, both in the Department of Organismic and Evolutionary Biology, Harvard University, and Professor Heather Bracken-Grissom, Florida International University.

The researchers chose the name Cretapsara athanata, which means the immortal Cretaceous spirit of the clouds and waters, to honor the Cretaceous, during which this crab lived, and Apsara, a spirit of the clouds and waters in South and Southeast Asian mythology. The species name is based on “athanatos”, immortal, referring to its lifelike preservation as if ‘frozen in time’ in the time capsule that is amber.

Author’s Statement: The studied fossil, deposited in the Longyin Amber Museum (LYAM), Yunnan Province, China, comes from a batch of commercial “raw” (dull, unpolished) amber pieces collected by local miners and sold to a vendor at an amber jewelry market in Myitkyina on May 12, 2015. The polished piece containing the fossil studied was acquired by LYAM from the vendor’s mineral store in Tengchong, China, on 10 August 2015. We acknowledge the existence of a sociopolitical conflict in northern Myanmar and have limited our research to material predating the 2017 resumption of hostilities in the region. We hope that conducting research on specimens collected before the conflict and acknowledging the situation in the Kachin State will serve to raise awareness of the current conflict in Myanmar and the human cost behind it. 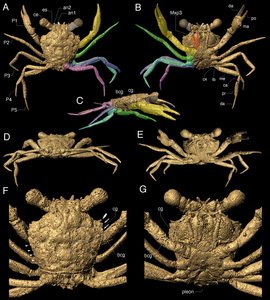 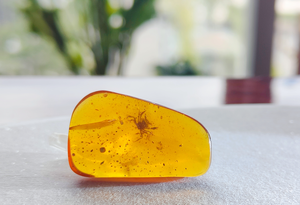