China's Chang'E-5 lunar sampling mission returned the first lunar samples since the Apollo and Luna missions, the last of which was in 1976. The 3.8 pounds of soil and rocks are the first fresh samples in 45 years, and they are the first samples from a previously unvisited mare basalt. The remnants of this solidified lava flow might be evidence of the Moon's most recent volcanic activity.

Researchers aged 47 basalt fragments, ranging in size from a dust particle to the thickness of about 10 pages stacked together, with radiometric dating and found that they were formed roughly 2.03 billion years ago - 800 to 900 million years more recently than the Apollo and Luna samples indicated. The multi-institutional team in China published their results on October 19, 2021, in Nature.

"This is the youngest crystallization age ever reported for lunar basaltic rocks by radiometric measurement, extending the range of radio isotopic ages of lunar basalt by 800 to 900 million years," said paper author LI Chunlai, a researcher at the National Astronomical Observatories of the Chinese Academy of Sciences (NAOC). "This study provides the first conclusive evidence that magmatic activity on the Moon persisted until at least two billion years ago."

"Apollo and Luna samples provided an initial database for ages ranging from 4 to 3.1 billion years ago, as well as those younger than one billion years ago," said LI. "The new age of 2.03 billion years ago obtained for the CE-5 basalts resides squarely in the center of this large gap, fulfilling the long-sought-after goal to bridge the unanchored middle portion of the lunar crater-counting chronology and improving this critical tool for dating unsampled surfaces on the Moon, as well as for translating the lunar crater-counting chronology to other planetary bodies."

While the CE-5 samples have helped fill the gap of magmatic knowledge, they may have also introduced a new mystery. The previous basaltic samples were found to be made from magma rich in a unique composition of potassium, rare earth elements and phosphorus, otherwise known as KREEP, that can produce heat and was likely a key player in the Moon's magmatic evolution. But the new samples do not appear to have the same composition levels.

"The KREEP-like components are related to how these youngest magmas originated," LI said. "According to the previous theory, the KREEP-like components would provide heat to sustain the longevity of young magma. However, if this is not the case - as these results suggest - we should rethink the mechanisms underlying the longevity of the younger lunar magmatic activity."

The researchers plan to continue analyzing the samples to better understand the thermal and chemical evolution of the Moon.

"This new insight into the existence of the youngest known volcanism provides a critical constraint for understanding the thermal mechanism behind the longevity of lunar magmatism," LI said. "The new age provides a pivotal calibration point for crater-counting chronology in the inner solar system and sheds new light on the volcanic and thermal history of the moon." 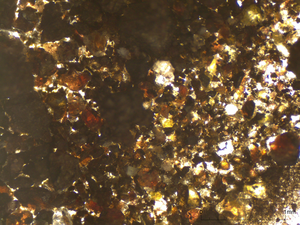