Russian scientists at Ural Federal University (UrFU, Yekaterinburg) and the Institute of Organic Synthesis, Ural Branch of the Russian Academy of Sciences have created an express sensor for the detection of nitrobenzene in food and cosmetics. In addition to requiring an ultra-small amount of material to analyze, the sensor also delivers unprecedented accuracy. It detects the presence of nitrobenzene, a dangerous toxin that can contaminate honey and other popular foods, in a matter of minutes. The description of the development was published in the Food Chemistry magazine.

Nitrobenzene is an extremely dangerous compound with a strong carcinogenic and mutagenic effect, which is difficult to chemically neutralize. It is widely used in the chemical industry as a solvent. Controlling the content of this substance in the food and the environment is an essential part of environmental monitoring. One of the foodstuffs most susceptible to nitrobenzene contamination is honey. This is caused by the use of insecticides used to protect bees and hives from ticks.

Most methods for determining the level of nitrobenzene in products require lengthy laboratory work and are therefore not suitable for quick on-site analysis. The development of portable analytical devices is of increasing practical interest, as the scientists of the Ural Federal University explained.

“The sensitivity and accuracy of such analyzers are determined by the structure of the "recognizer" - the so-called receptor layer. As a rule, it consists of enzymes, universal biological catalysts, which, along with some advantages, have a high cost and low chemical stability,” said the head of the research group, professor at UrFU Alisa Kozitsina.

University specialists have developed a synthetic receptor as a replacement for enzyme-based systems, and also created a prototype of a portable analyzer based on it. Its principle of operation is based on the use of organic compounds of the diazine class: these substances are able to selectively interact with nitrobenzene, "pulling" it out of the analyzed sample onto the electrode of the electrochemical sensor. According to the creators, the new method is distinguished by exceptional sensitivity and minimal labor costs for sample preparation.

“Unlike optical spectral analyzers currently used to search for nitrobenzene, electrochemical sensors are miniature, easy to manufacture, and require an ultra-small amount of the analyzed product. Our recognition system and the prototype of an electrochemical sensor have no direct analogs in the world,” said associate professor at UrFU Tatiana Svalova.

Using the new approach, the researchers were able to detect unsafe amounts of nitrobenzene in some commercial honey samples that were missed in the analysis of the accepted methods. An important advantage of the new method is the possibility of implementation both in stationary laboratories and in the form of portable devices. The development will be in demand not only in environmental monitoring and food quality control but also in industry, for example, in the production of cosmetics, scientists are sure.

The research team plans to make sensors universal and widespread. At the same time, they want to continue both fundamental research in this area and the development of new analytical systems for working with hazardous chemicals and drugs.

Rapid and sensitive determination of nitrobenzene in solutions and commercial honey samples using a screen-printed electrode modified by 1,3-/1,4-diazines 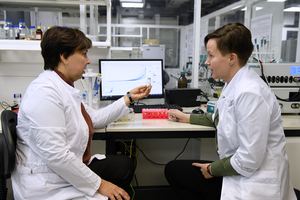