Since the advent of electronic devices such as smart phones and tablets in 2007, researchers have been looking for the next generation of transformative technologies. Glasses-free 3D display is one of the technologies that will redefine portable electronics. However, limited by the resolution of display panels, the spatial resolution, angular resolution and viewing angle have become critical trade-offs in 3D displays.

In a new paper published in Light Science & Application, Prof. Linsen Chen, Prof. Wen Qiao and co-workers at Soochow University, China, proposed a general approach of glasses-free 3D display, through which spatially variant information is projected over the observation region. Densely packaged views are arranged at the center, while sparsely arranged views are distributed at the periphery. To manipulate view distribution over a large scale, they designed a feasible strategy based on a view modulator full covered with 2D-metagrating complex (2DMC). More interestingly, they developed a flexible interference lithography (IL) system to enable the fabrication of the view modulator with more than 1,000,000 pixelated 2D metagratings over a size larger than 9-inch. With a total display information smaller than 4 K, a static or video rate full-color 3D display with an unprecedented field of view (FOV) of 160° is demonstrated. The proposed 3D display system has a thin form factor for potential applications in portable electronic devices.

“The designed large-scale 2D-metagrating complex has three purpose: (1) to vary the angular separation of the views in different region; (2) to tailor the irradiance pattern of each view to eliminate overlap between views to avoid crosstalk; (3) to avoid gaps between views to ensure smooth transition within the field of view.” they added.

“The demonstrated spatially variant information density 3D display opens a new avenue for glasses-free 3D displays by tackling the critical trade-off among the spatial resolution, angular resolution and viewing angle. We anticipate the ultrawide-FOV foveated 3D display to be used in commercial applications such as consumer electronic devices.” the scientists forecast. 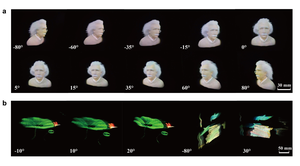